I used to spend a lot of time at the auctions in Los Alamos where Lab equipment that wasn’t used anymore was sold. I’d drive up with a friend who was seemingly addicted to buying surplus equipment. At one point I bought a mobile darkroom from him that was housed in a semi-trailer. It was self-contained and amazing. You can imagine what it cost the government when it was built. I was, and still am, fascinated with all kinds of old equipment. The more dials and switches and meters, the better.
​
When I wander through surplus equipment, I find myself crafting scenarios about the things I encounter — more on this shortly.

I’ve purchased a lot of things at the surplus sales, that I admit, I didn’t really have a use for and my house has turned into something akin to a warehouse — a place that my grandsons love to explore — opening boxes and finding “treasures” inside.

If there were a 12-step program for surplus hoarders, I might be attending regularly.

“Hi, my name is Bob and I have a problem with surplus equipment purchases.”

Realizing I had purchased enough for more than one lifetime, I started frequenting a large surplus store called Surplus City in Albuquerque to photograph things instead of buying them.

When I was attending auctions in Los Alamos, I never thought of going to the famous surplus store there called The Black Hole. When I finally started photographing these “treasures,” The Black Hole was unfortunately closed.

I’m not as interested in the inside of the store and what it holds, although I admit there are many fascinating things. The area that I keep going back to is the three-acre outdoor storage yard that contains a cornucopia of “discarded items.” You name it, and you can probably find it stuffed somewhere in that three- acres.
When I wander around I find myself telling stories about what I encounter. A while back I saw two lovely, cast handles, which he says were probably the controls of a tractor or backhoe.

Right next to the handles was a huge, I mean huge, water valve with a metal wheel. I immediately thought of the vintage movie, Run Silent Run Deep, with Burt Lancaster and Clark Gable. I started moving the handles back and forth... Full Speed Ahead Captain, steering 214 degrees true. Since the wheel was right next to the controls, for a moment there I was in complete control of a World War II submarine.

I admit I get a little carried away at times.

But I can’t help it. There are so many things to photograph and so many unique things I discover that get my mind revolving, that it is like being in a wonderland for me with unexpected things around every corner.”

A friend started calling my photo series “Surplus Love’ because it was like I had a mistress I kept visiting.

Sound like a good title for a country western song.

I’m not really sure why these things appeal to me. I supposed I just love to imagine what some of these things were used for. Some, like a winch, I know, but others are a complete mystery to me and that is fun because as I wander around, I’ll see something intriguing and make up a story about it and its use. Sometimes the stories can become pretty involved and strange.

There is also the appreciation of the quality of craftsmanship and the materials that went into the things I photograph.
When you look at some of these things, even if you have not the slightest idea of what it was used for, you have to appreciate the quality of machining or the thickness of the metal used.

That brings up a comment that one of my friends have offered in terms of the meaning behind the photographs — that they are a comment on the waste that seems rampant in the United States. You know, how we are such a throw away society.

There are probably a lot of things I encounter that could still be in use, but others, like some of the higher tech things, become outdated quickly and replacements are inevitable.

Some might view these images as a statement on waste or our society in general, but I’m not really out to make a political or ecological statement with my work, but if people who see it want to interpret it that way, then I’m more than happy to oblige, feeling that creating images that prompt people to think and question is one role of the photographer in our society.

I do see so much, and it’s obvious that what I am looking at was originally very expensive, so yeah, at times I find myself dwelling on the waste I encounter. But then I think, hey, it’s cool, these things are there for the public to buy and reuse, and they offer me an abundant supply of photo subjects, which I am grateful for.
As I wander around I look for shapes or compositions that attract me. A curling cord or pile of fire extinguishers or a row of dials. Then, after photographing them, I go home and head to my computer and start checking out the day’s offerings in Photoshop.”

I often try to make the images look as if they might come from a family photo album.

If I just print them as I photographed them, they often appear too contemporary-looking to me. Although they might not be as old as I make them look, they do have a history to them, and a mystery, at least to me, and I try to show that history and convey the sense of mystery, in my post processing.

I realize a lot of people look down on post processing, but for me, the final result is what is important. If I alter an image, making it less true to the actual subject, but more in tune with my vision of the piece, then I feel the alterations or modifications are justified.

I tend to lean more toward black and white or toned images. But there are those compositions that call out to have color in them.

One of my favorite images shows a dial, but all the paint and numbers have crumbled off the backing and are sitting at the bottom, unreadable. It speaks strongly of decay and loss in a very sophisticated and subtle manner. It also speaks to the amount of technology equipment that is discarded frequently.

When I encountered the dial, I immediately thought about a story he had read about Howard Hughes and his ill-fated flight that crashed in Los Angles, Calif., in which he was severely injured. I could easily imagine Hughes glancing down at the gauge as his plane, powerless at the time because of engine failure, and seeing the altimeter racing counterclockwise so rapidly that the dial markings finally just disintegrated. At that point Hughes knew he was in serious trouble.
A lot of times I’m prompted to create a story for my subjects as I encounter them, but other times I’m just fascinated with the composition or, in the case of the winch cover, the ornate lettering used in a bygone era. 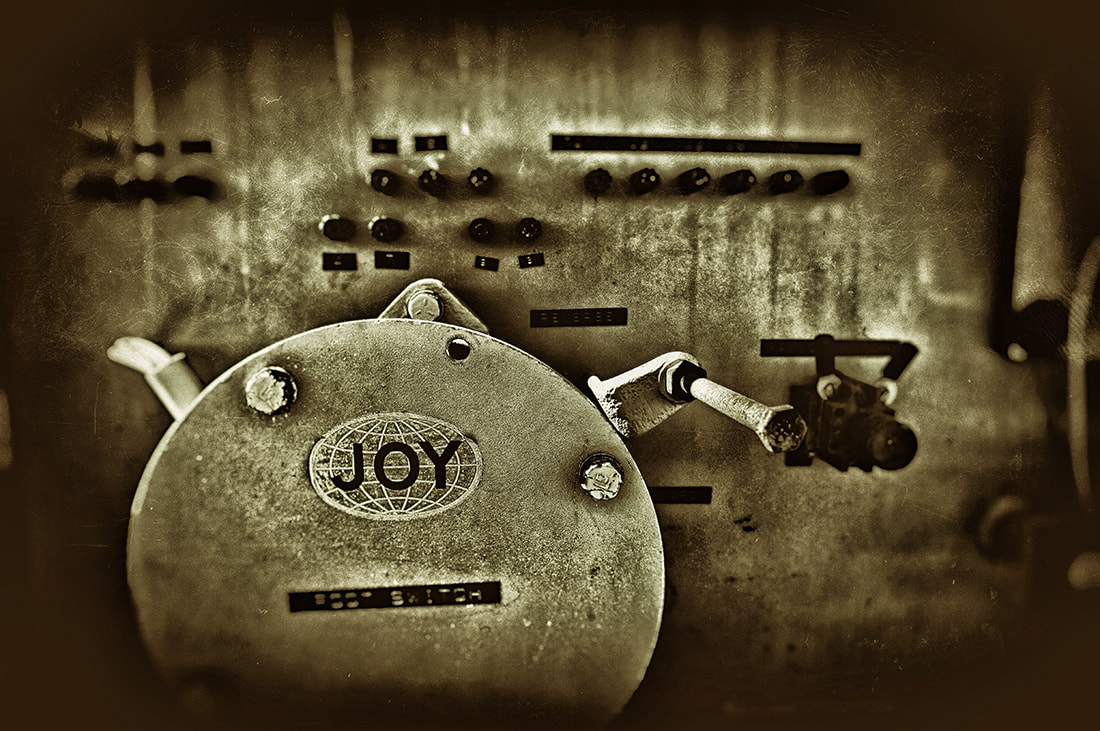 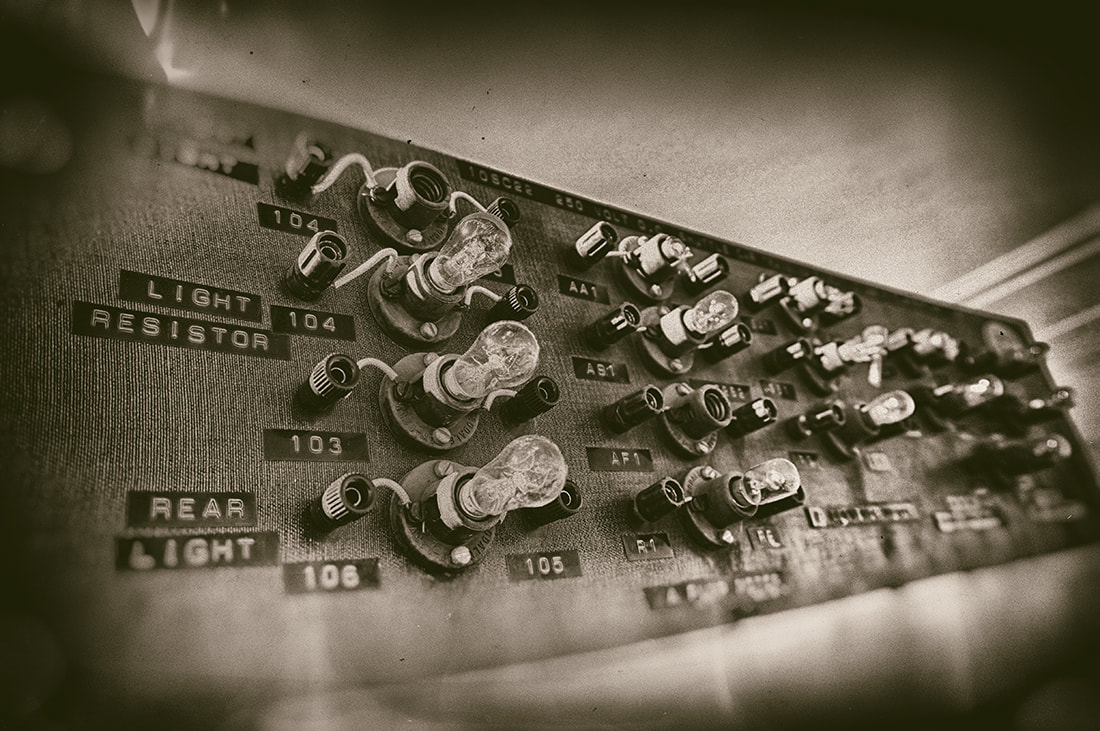 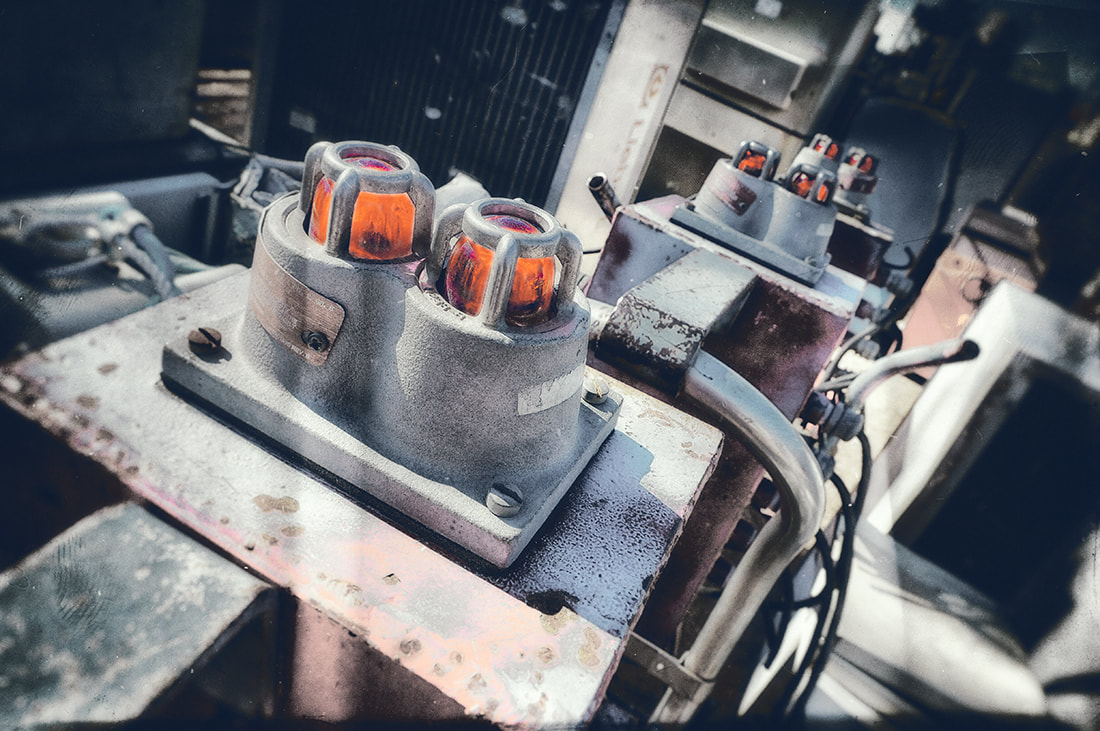 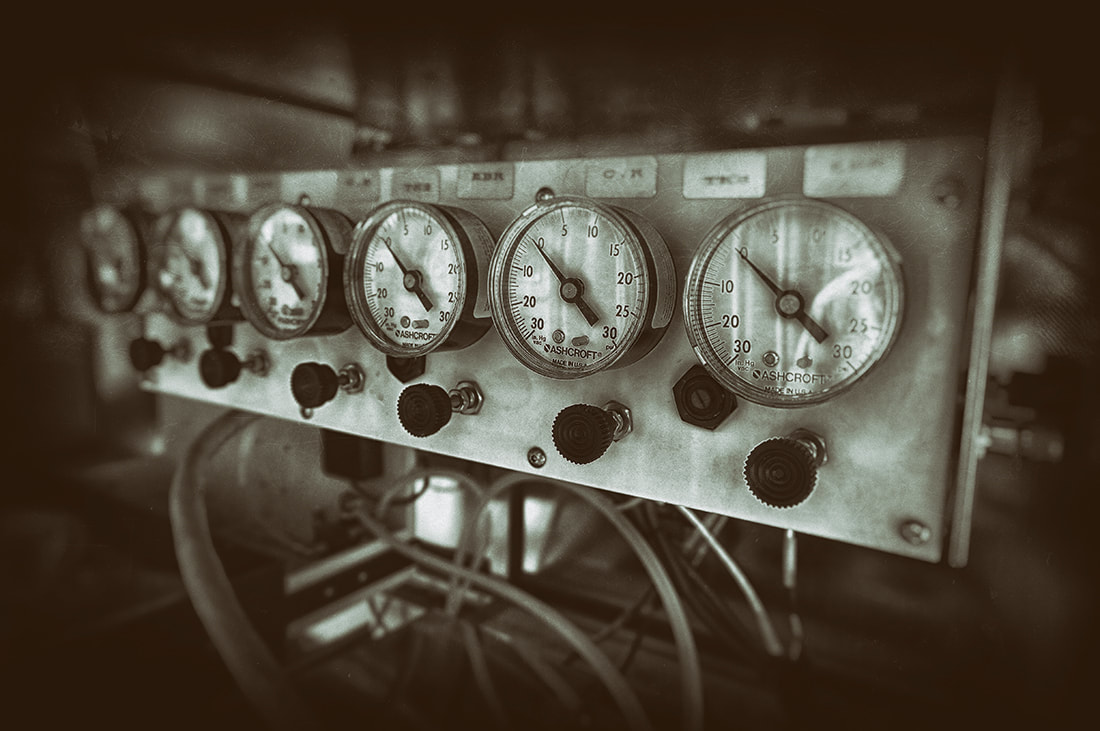 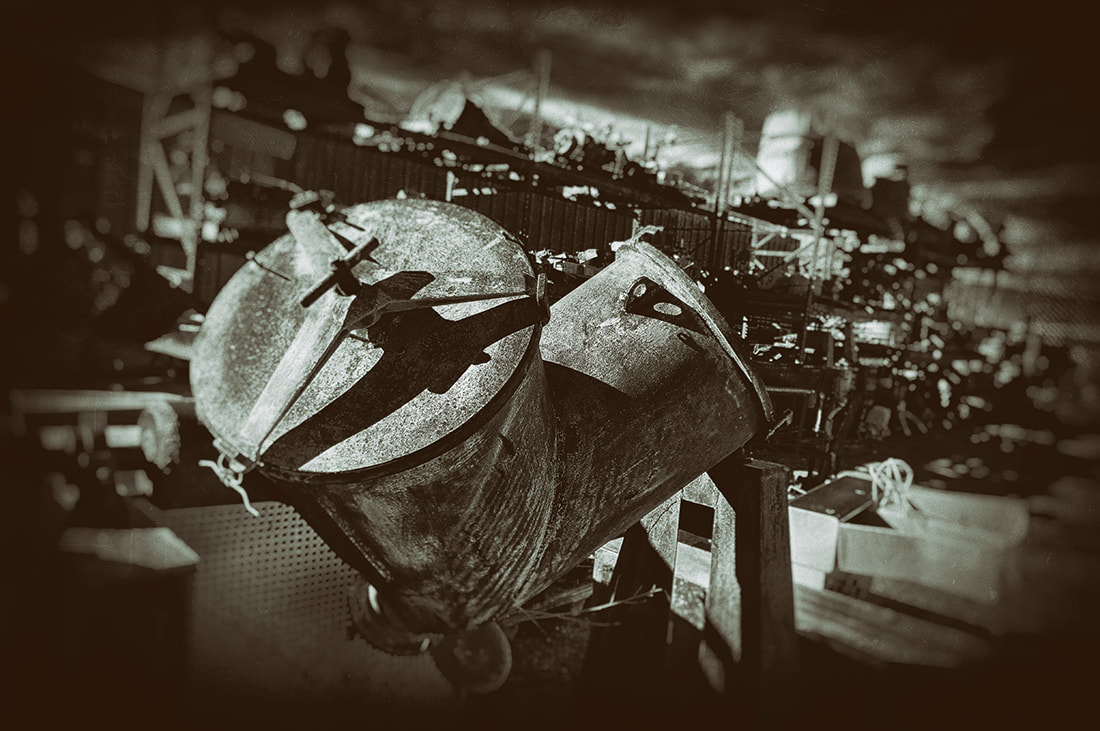 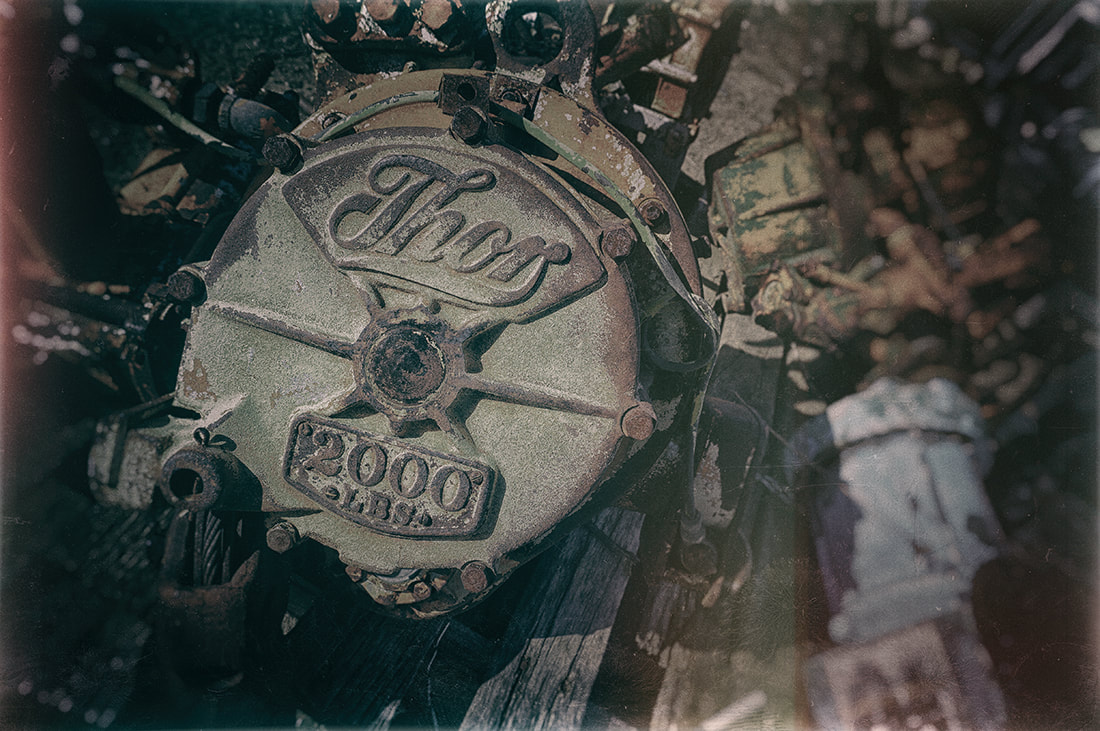 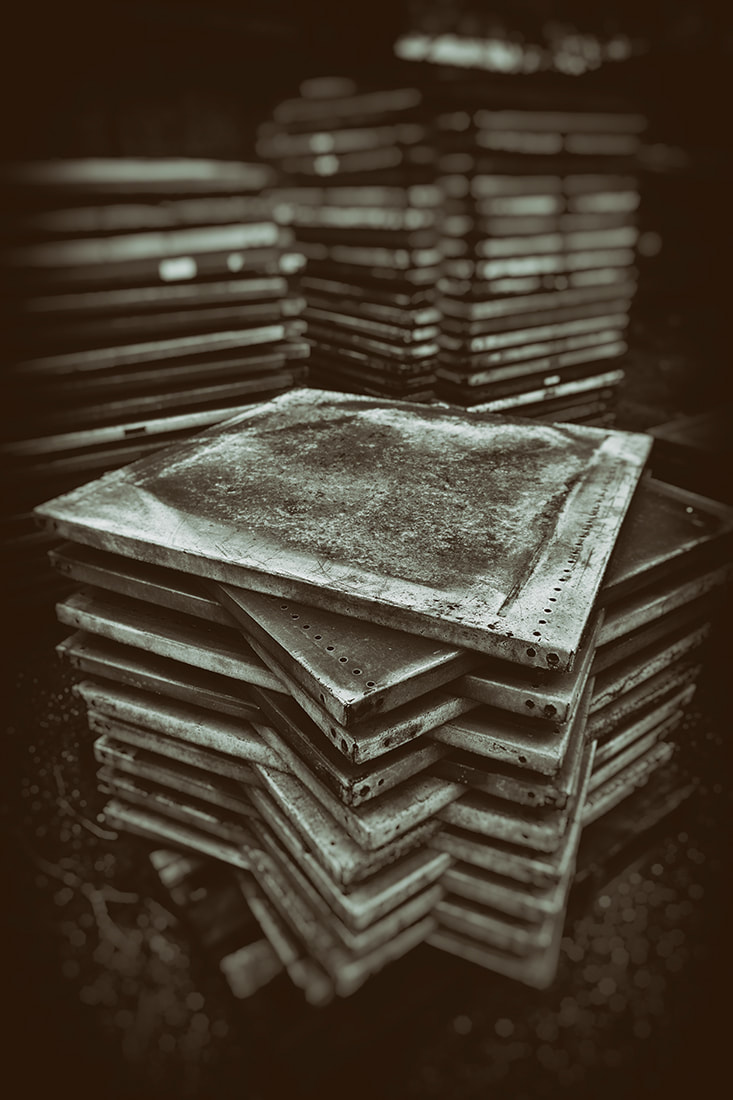 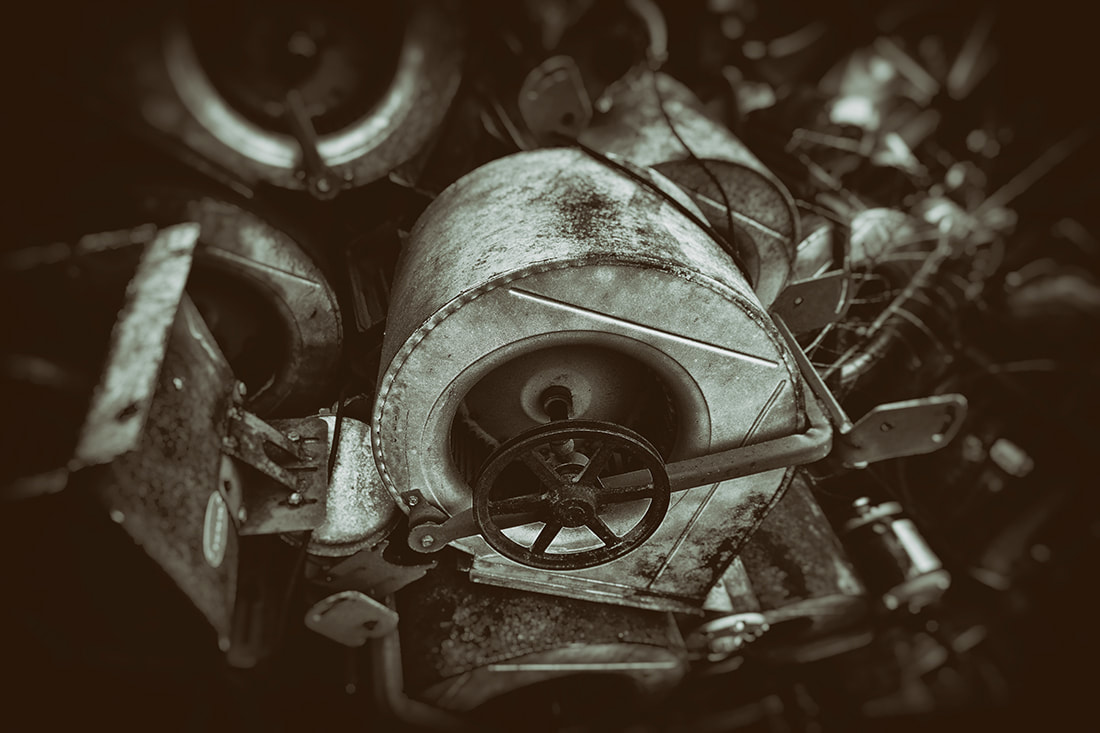 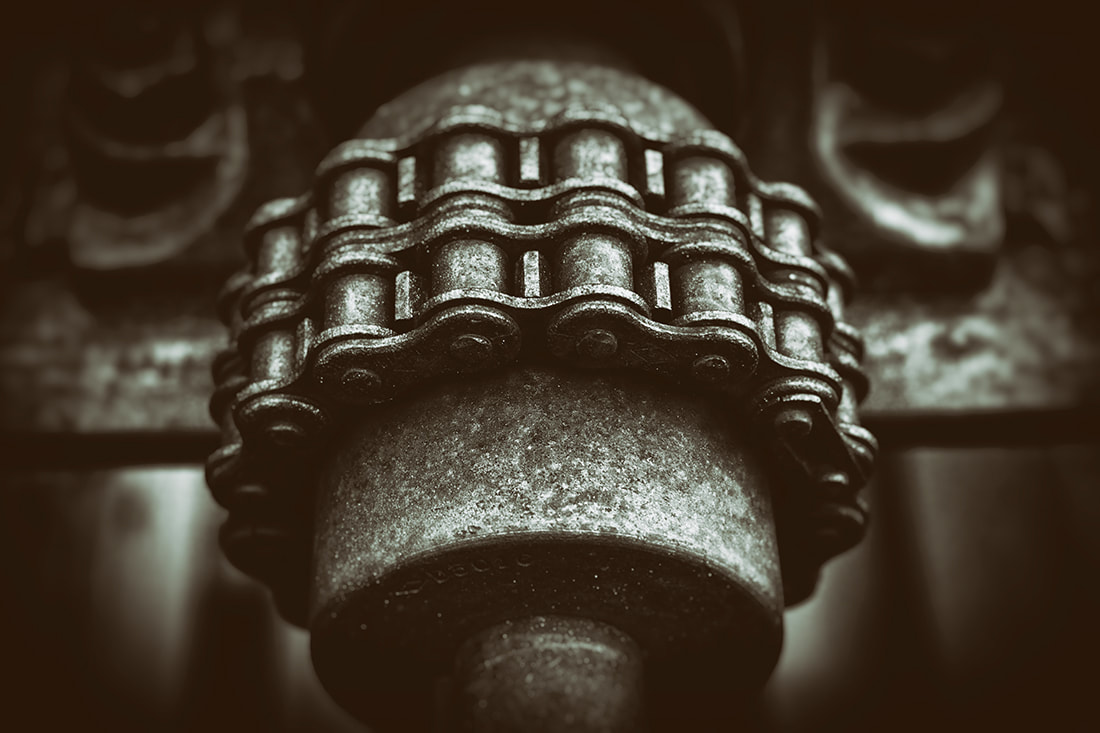 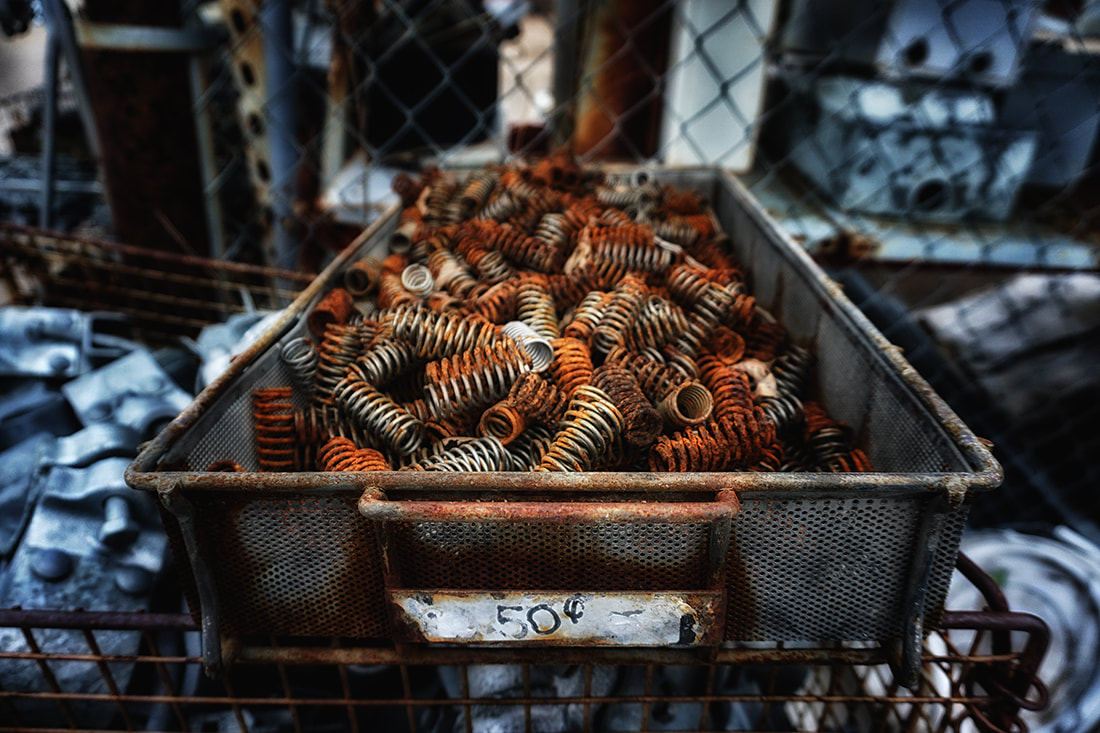