Albuquerque's Marigold Parade Celebrating the Day of the Dead 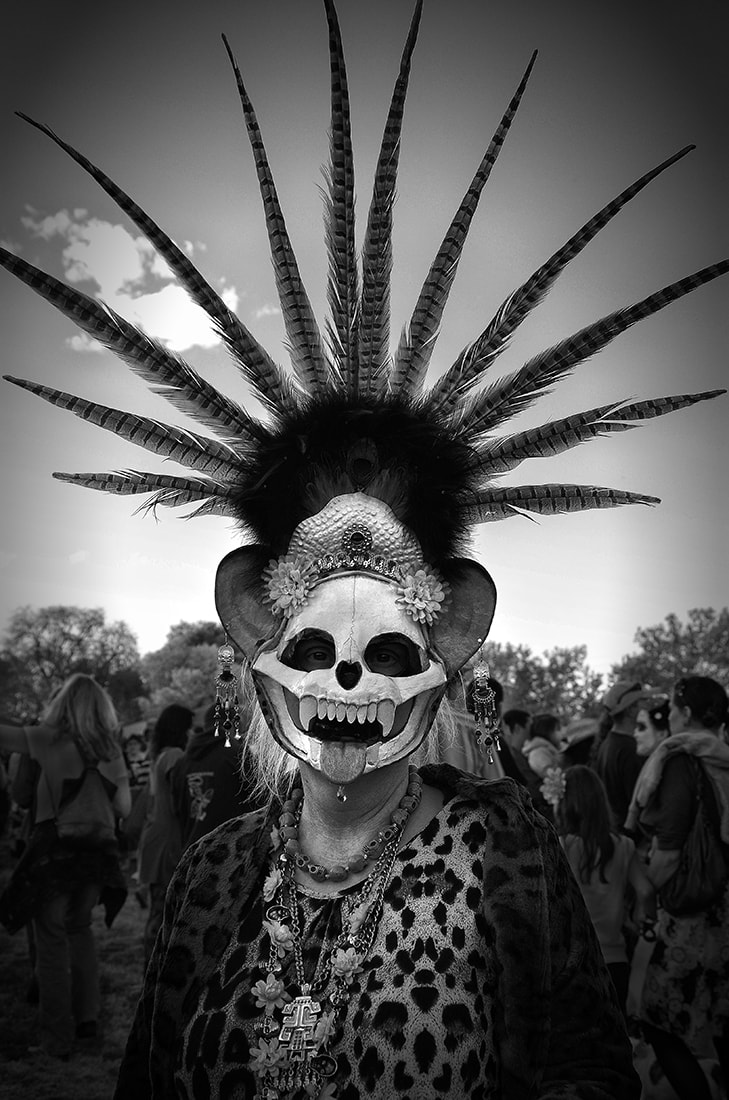 Organizers of the quarter of a century South Valley’s Día de los Muertos Marigold Parade announced the 2019 parade won’t take place this fall.The reason for this year’s cancellation is, surprisingly, because it was so successful last year. The anticipated 6,000 visitors turned into almost 17,000.

On the organizer’s website, they said, ““Since the last parade in 2018, it has become apparent that our event has grown at a rate that we could not have anticipated,” the group said. “The Muertos y Marigolds Organizing Committee has had to take a step back to address the issues and rededicate our efforts to the Committee’s mission.”

​With the cancellation — hopefully temporary —  in mind, I thought I’d put up a story and some info along with  a few photos from some recent parades. 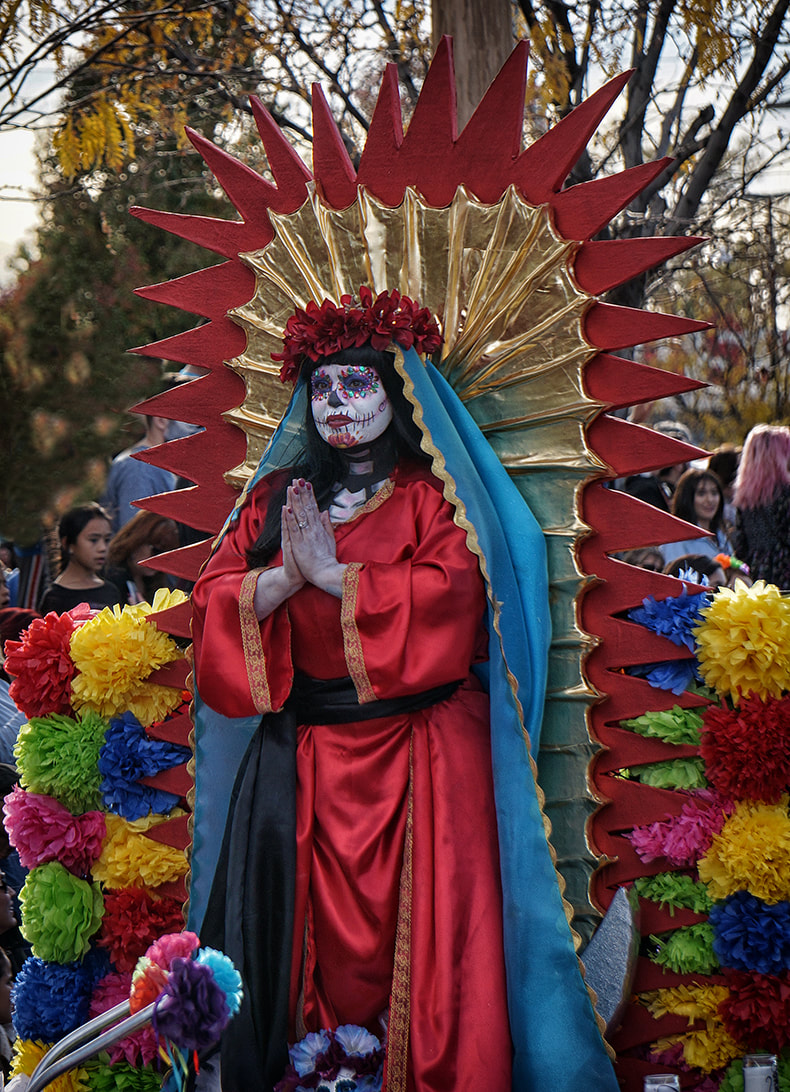 The Day of the Dead Parade, or Marigold Parade as it is known in Albuquerque, is like a movie by director Tim Burton, with a cast of thousands consisting of a combination of Circe de Sole and a Haitian Voodoo ritual dance group mixed all together with music, food, lowrider cars and trucks, commercially-oriented floats, hoola hoops, socially conscious entrants, ROTC (if you can imagine ROTC with their faces painted white like skeletons), and so much more. And it’s a terrific endorsement for the use of face makeup.

One of the dance groups had its own musicians along: drums and an accordion player. As they progressed down the street, the musicians would stop periodically, and the dancers would immediately stop and freeze in whatever pose they were in at the time. It reminded one of playing “Simon Says,” although in this case, the music stopping and starting was the equivalent of the phrase, “Simon Says.” It made you want to be a musician playing for the dancers. Ah, all that power at your fingertips. Like in Simon Says where you have them doing things Simon tells them to do and then abruptly just tell them, without the “Simon Says” jump, or twist, or fall down. The music stopping made them all freeze, and they, and parade spectators, anxiously awaited the resumption of the music so they could continue dancing. What power that accordion player held! Or the drummer! The dancers are watching you closely and you seem to be about to strike the drum, and then at the last moment you stop the drumstick from reaching the drum head, but the dancers, thinking music was coming, were already in motion. Aha! Please move to the side of the street, you moved without there being music.

This didn’t happen, of course, the musicians were too well behaved. But the thought was tempting, nevertheless.

Families came. People with pets came. It seemed like everyone in the South Valley came. There was one young girl riding in the backseat of her father’s vintage car and as the car passed by she noticed a photographer and she smiled, sat up straighter in her seat, and waved in the same regal manner as the royalty does in England.

When lowriders in the parade would either jump themselves up with hydraulics, or lower themselves down dramatically, the crowd would respond as if the driver had just won the Nobel Prize.

One viewer commented, while walking among a large number of people with skeleton like faces, that is was like being in a zombie movie, but that isn’t so, zombies, as you know, are the undead, and this whole Day of the Dead thing is about the dead: honoring them… remembering them…

It was something like a Latin version of an Irish wake.

Día de Muertos or Day of the Dead is a Mexican holiday observed throughout Mexico and around the world in other cultures. The holiday focuses on gatherings of family and friends to pray for and remember friends and family members who have died.

It is particularly celebrated in Mexico where the day is a bank holiday. The celebration takes place on October 31, November 1 and November 2, in connection with the triduum of Allhallowtide: All Hallows' Eve, Hallowmas, and All Souls' Day. Traditions connected with the holiday include building private altars called ofrendas, honoring the deceased using sugar skulls, marigolds, and the favorite foods and beverages of the departed, and visiting graves with these as gifts. They also leave possessions of the deceased.

Scholars trace the origins of the modern Mexican holiday to indigenous observances dating back hundreds of years and to an Aztec festival dedicated to the goddess Mictecacihuatl. The holiday has spread throughout the world. However, it is noteworthy that this holiday is not typical of all Mexicans because it happens to be a holiday that has become a national symbol and as such is taught (for educational purposes) in the nation's schools, there are many families who are more attached to celebrate "All Saints Day" as they do in other Catholic countries.

Originally, the Day of the Dead as such was not celebrated in northern Mexico, where it was even unknown until recently, still in the early twentieth century, the tradition was rejected by people and church primarily in northeastern Mexico because of their perception of trying to syncretize pagan elements with religion, and instead was held the traditional “All Saints Day” the same way as the rest of the Catholics in the world; This is due to the limited or no Mesoamerican influence in this region. However, in present day northern Mexico, Día de Muertos is observed because of the Mexican government introduction of the holiday through educational policies from the 1960s, in their efforts to expand the tradition in the north of the country. In Brazil Dia de Finados is a public holiday that many Brazilians celebrate by visiting cemeteries and churches. In Spain there are festivals and parades and, at the end of the day, people gather at cemeteries and pray for their dead loved ones. Similar observances occur elsewhere in Europe, and similarly themed celebrations appear in many Asian and African cultures.

Although the parade seems to get away from the serious intentions of the Day of the Dead in terms of memorializing the departed, there were those entries that did, indeed, serve as a rolling memorial to someone dear. One trailer had large pictures of a young girl who had died and was surrounded by flowers, friends and family. It was reminiscent of Chinese funeral processions where there may be block long trains of cars with participants holding giant photos of the recently departed.

There are Day of the Dead events in other places in New Mexico, Santa Fe, Taos and the town of Mesilla near Las Curces, but the Marigold parade is really “the” Día de Muertos event to go to if you really want to experience the vibrancy and unreal, movie-like nature of the event. 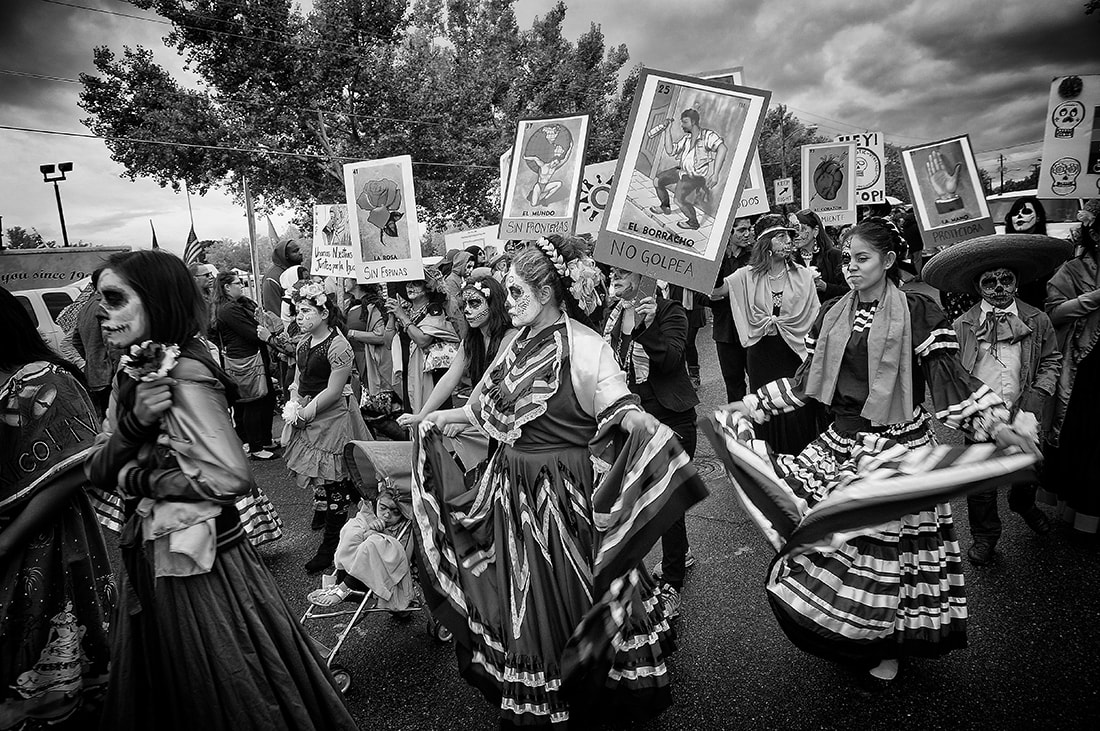 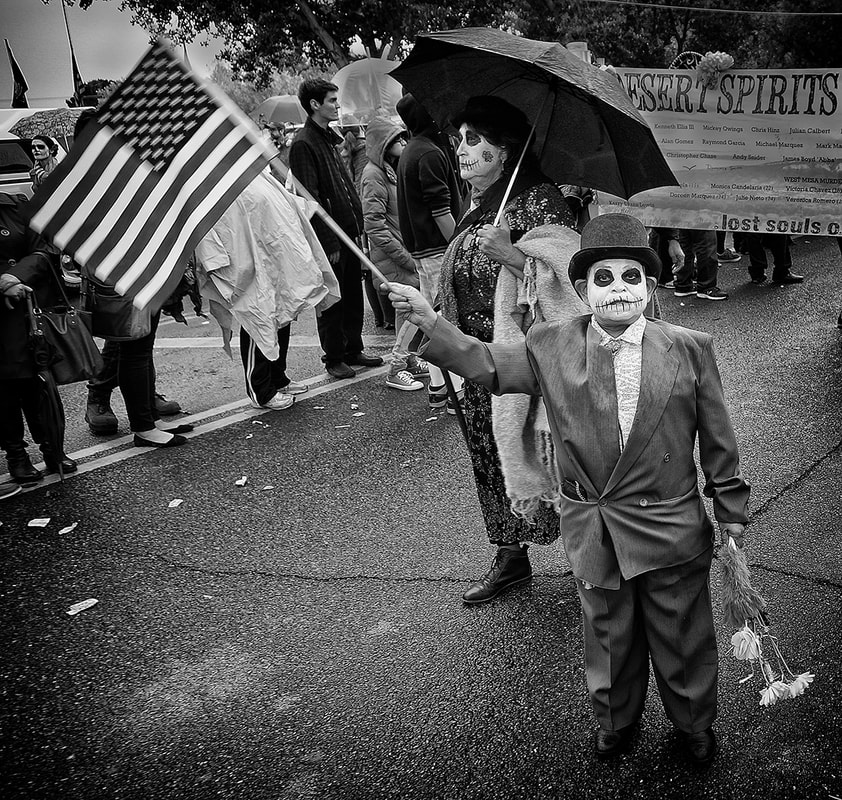 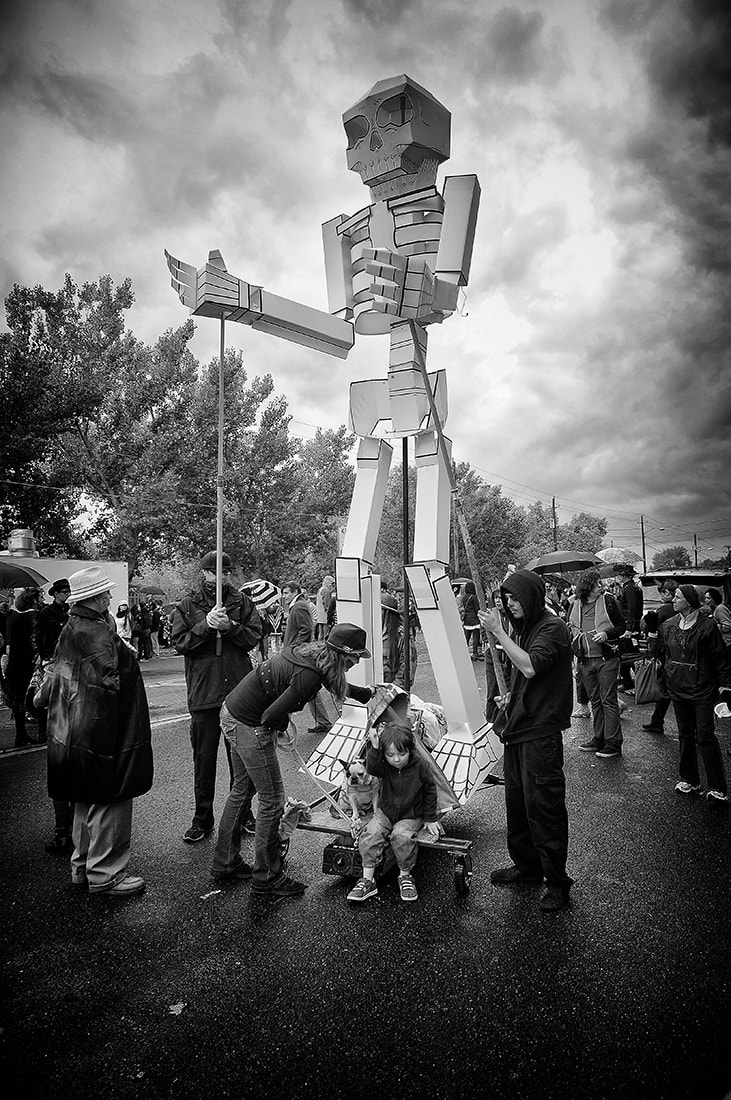 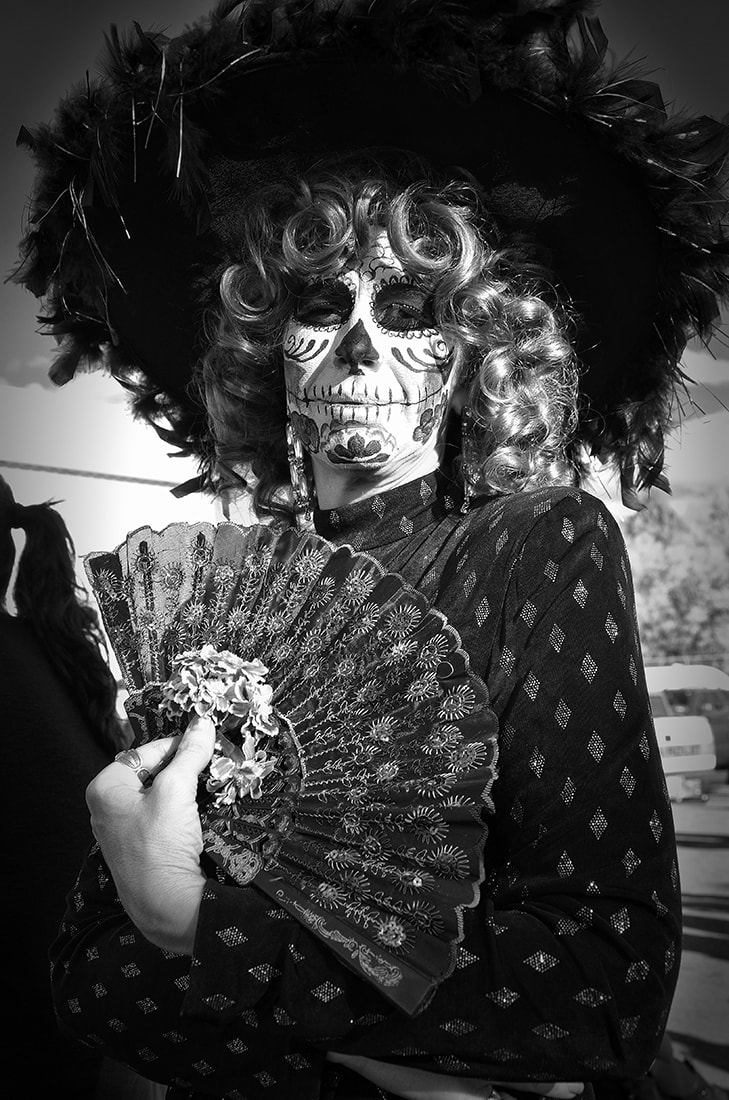 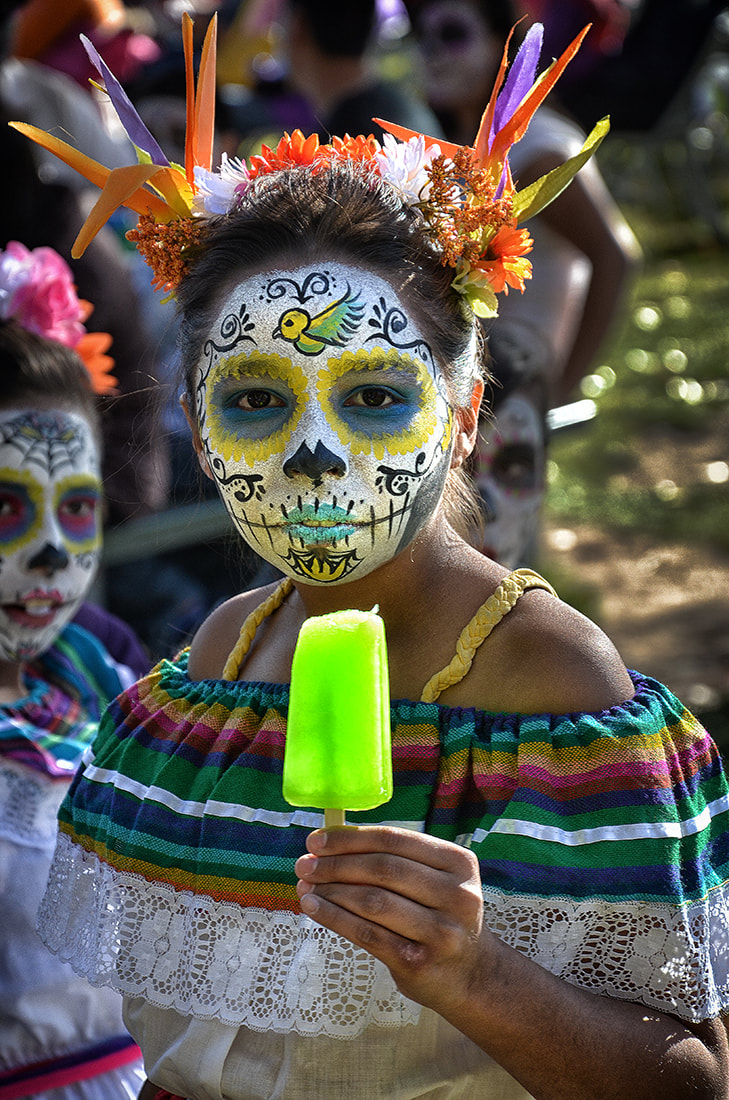 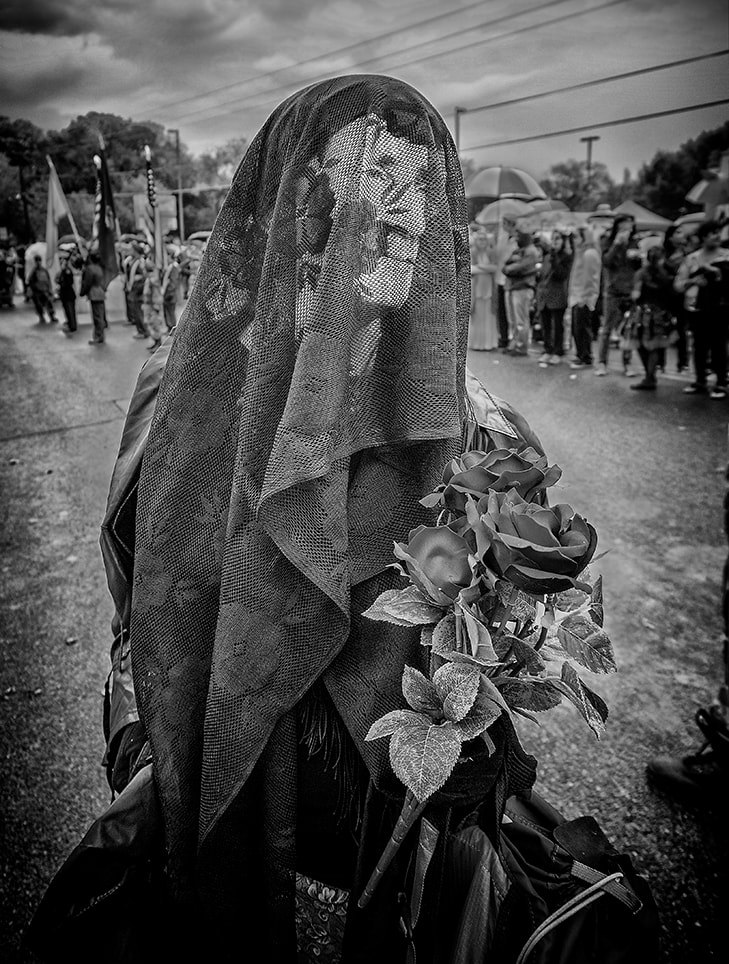