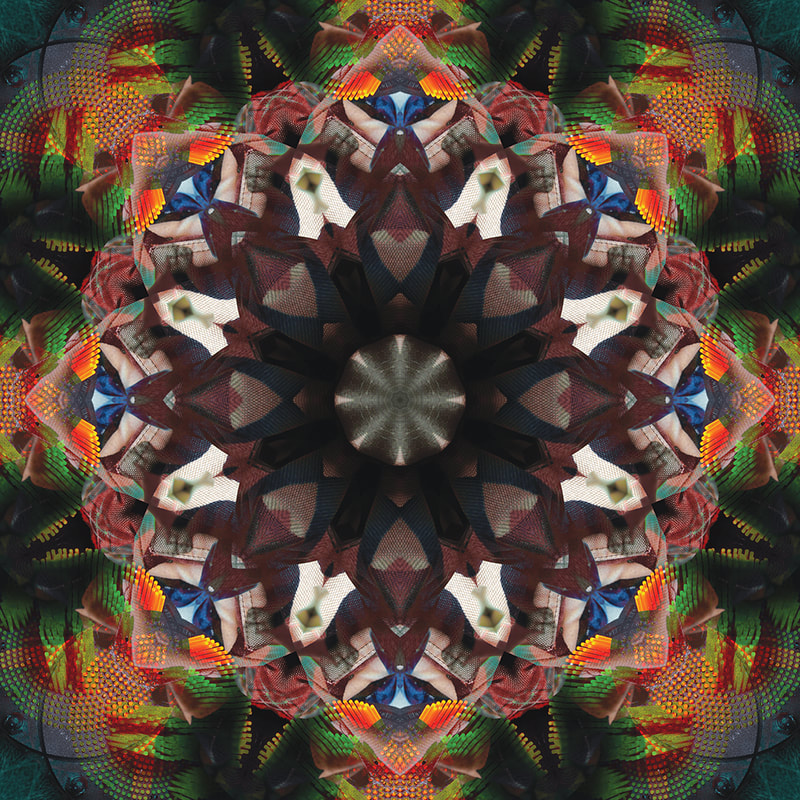 I’ve always been fascinated with vinyl records — well, not so much the records themselves, but more so with the covers and cover art.

I’ve been in love with vinyl covers for a very long time. Led Zeppelin created some marvelous covers, but at that time, there were so many LP covers that really broke out that it is hard for me to pinpoint favorites. I have a growing collection of vinyl records that I’ve purchased at thrift stores simply because I admired the cover artwork.

One company I really admire for their taste is cover art is Windham Hill. They are not of the ‘60s and ‘70s rock cover art genre, but more contemporary, sophisticated, stylized design.

With Windham Hill as a focus point, I decided that I needed to create some images that were more design oriented than pictorial, even though Windham Hill does use what one might call ‘traditional’ images on some of their covers. From when I was young, I’ve always liked the magical quality of looking through a kaleidoscope, so I thought I’d try to replicate that in some of my photos and then see if I could market them to some of the record companies.”

Since a kaleidoscope is somewhat outmoded in this digital age, we’ll offer a brief explanation of what one is — a Kaleidoscope 101 if you will — to introduce you to the visual effect Cruz wanted to achieve photographically.

A kaleidoscope is an optical instrument with two or more reflecting surfaces tilted to each other in an angle, so that one or more (parts of) objects on one end of the mirrors are seen as a regular symmetrical pattern when viewed from the other end, due to repeated reflection. The reflectors (or mirrors) are usually enclosed in a tube, often containing on one end a cell with loose, colored pieces of glass or other transparent (and/or opaque) materials to be reflected into the viewed pattern. Rotation of the cell causes motion of the materials, resulting in an ever-changing view being presented.

I have found Photoshop “actions” on the Internet to download and use, but I wasn’t completely satisfied with the results they offered so decided to create my own action.

A Photoshop action, for the uninitiated, is a series of recorded steps by the designer to help a photographer achieve a look without having to manually apply each process. Actions allow photographers, at the click of a button, to enhance and enrich their photos in a fast and efficient way. They are shortcuts for photographers and they speed up editing by automating processes.

Basically I wanted an action that would duplicate a section of a photograph I had selected four times, rotate it each time it was duplicated, and combine the four segments in a manner that created a pattern that was, more times than not, more abstract that realistic, and, I hoped, resembling an image one might encounter in a kaleidoscope. I hope that makes sense, but I’m guessing it doesn’t. The easiest way to describe my ‘Kaleidoscope’ images is simply to look at them,

One of the things I like about using my kaleidoscope action is that I never really know what to expect with the final result. There are those occasions when I can somewhat predict what the end result is going to be, but more often it really is like looking into a kaleidoscope toy and seeing images that you never expected to see. Although I usually like to have a lot of control over my images, the surprises the kaleidoscope photos provide are fun.

This was unusual because after I used my kaleidoscope action to transform the image, which is my usual procedure to come up with a final image, I used the action a second time.

The second pass through the action resulted in an image that was so detailed it reminds one of Victorian wallpaper, but in a contemporary setting. 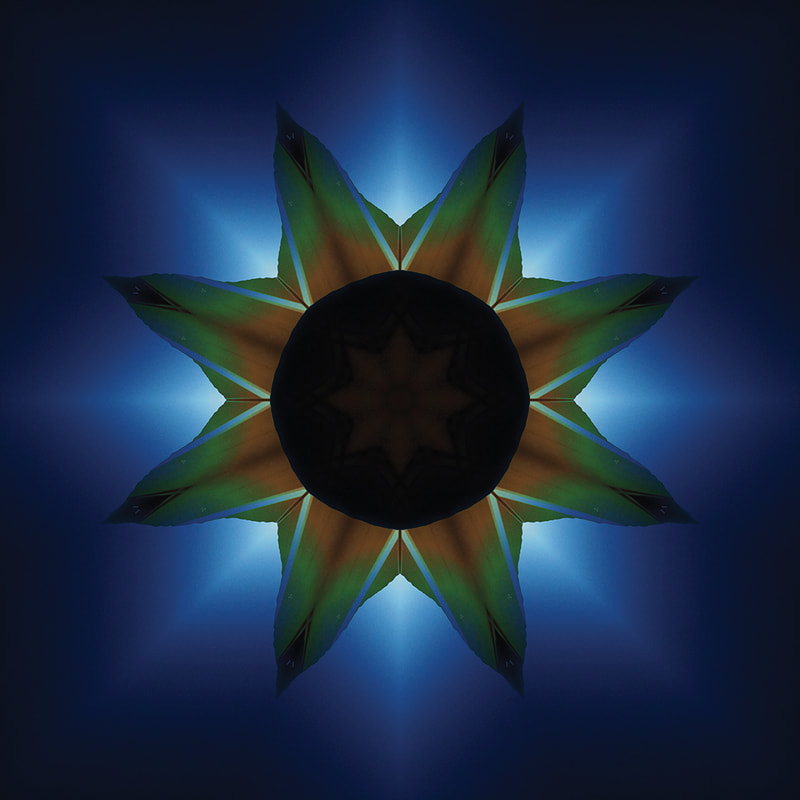 ​Another example of the end result being drastically different than the original photo is the one above.

The photo I started with was a very early morning road scene with my car headlights illuminating the roadway in front of me with mountains in the rear. I’ve always liked the original image and was very satisfied with the way it came out, but for some reason I thought it might work for one of my kaleidoscope photos, too. And I think it did, nicely. 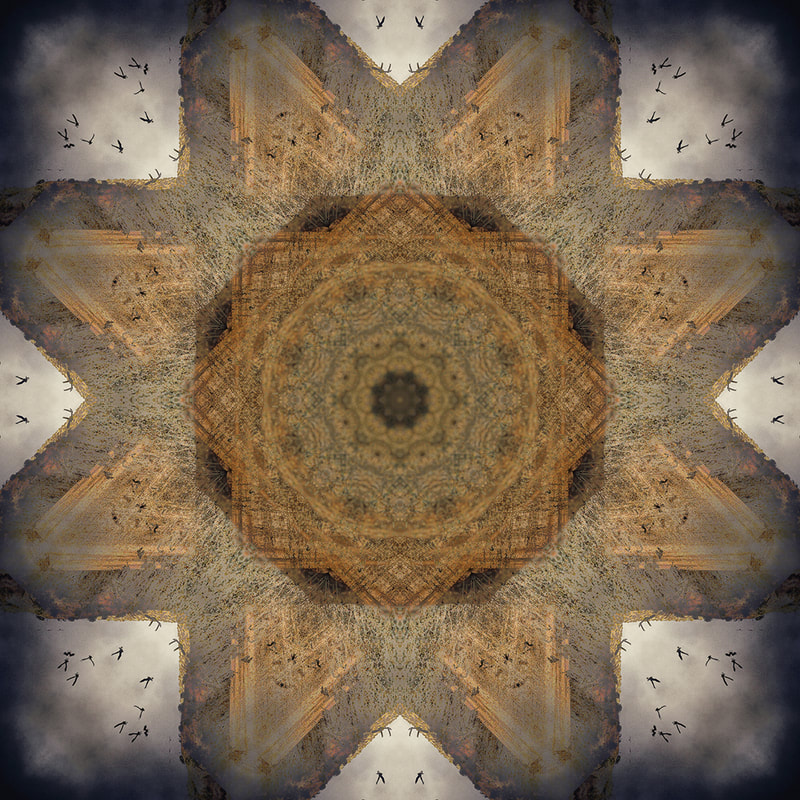 The photo above was taken in Abiquiú, New Mexico.

I was passing through Abiquiú on my way to Santa Fe and saw a large number of geese sharing a field with a herd of cows. I liked the very rural feel to the scene and migrating birds always seem to catch my eye so I stopped to take a few photographs. I played around in Photoshop to make it look a bit more antiquated, and liked the “standard” looking photo. I then thought it might work as a kaleidoscope photo so I cropped it down to just cows and birds and then applied my action. This one is a particular favorite because the birds seem to inhabit the whole image in a ghostly fashion. A lot of times when I apply the action to a photo, individual aspects of the original image are lost, but in the case of the birds, they appear to fly through the whole piece, which pleased me a lot. I think it has a children’s book illustration quality to it. 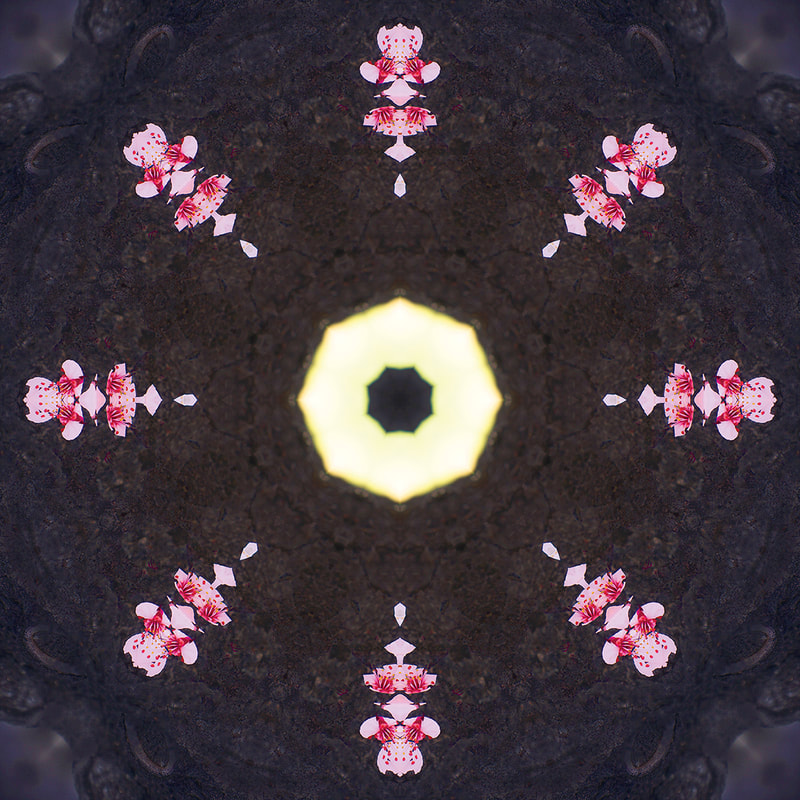 The photo above was taken in Albuquerque, New Mexico.

I was in Albuquerque for a meeting not long ago and passed a row of trees that had very dark, almost black, bark. On one of the branches was a pink flower that contrasted wonderfully with the dark bark. When I got back home I was looking through the pictures from that day’s trip and liked the idea of the pink flower against the dark bark but the photo just didn’t work for me when I opened it in Photoshop. There was something missing. But then I thought I’d try my kaleidoscope action on it and it seemed to work OK, although, admittedly, it’s not one of my all time favorites in this series.

In my normal photographic work, I try to have compositions that are not static. I try to have elements that keep the viewer off balance, so to speak, but keep them involved in the image, nevertheless. The kaleidoscope photos, on a whole, don’t have that ‘off balance’ element to them.

Although I would rather the whole series be not so identified with a symmetrical feel, I do like the choreographed, synchronized swimmer kind of genre the symmetry does add.

Symmetrical isn’t my normal choice in my usual photographic pursuits, but I do enjoy the meditative quality the symmetry does provide in this series. There is something soothing in a very symmetrical image, whether it be a painting, sculpture, or in this case, my photographs.

In addition to being very symmetrical, my kaleidoscope photographs have a star image incorporated as a centerpiece. The star comes from the way my action assembles the various parts it picks to use in the final image. This “star” adds a cohesiveness to the whole series, but also, if one finds the symmetry unwelcome, might be a reason to feel less than enthusiastic about the images. But with that said, even with the symmetry and the apparent repetition of the star motif, the series works for me on an experimental level. When viewing the pieces together, one can easily associate their visual “personalities” with that of mandalas, which are also meant to be soothing and meditative. 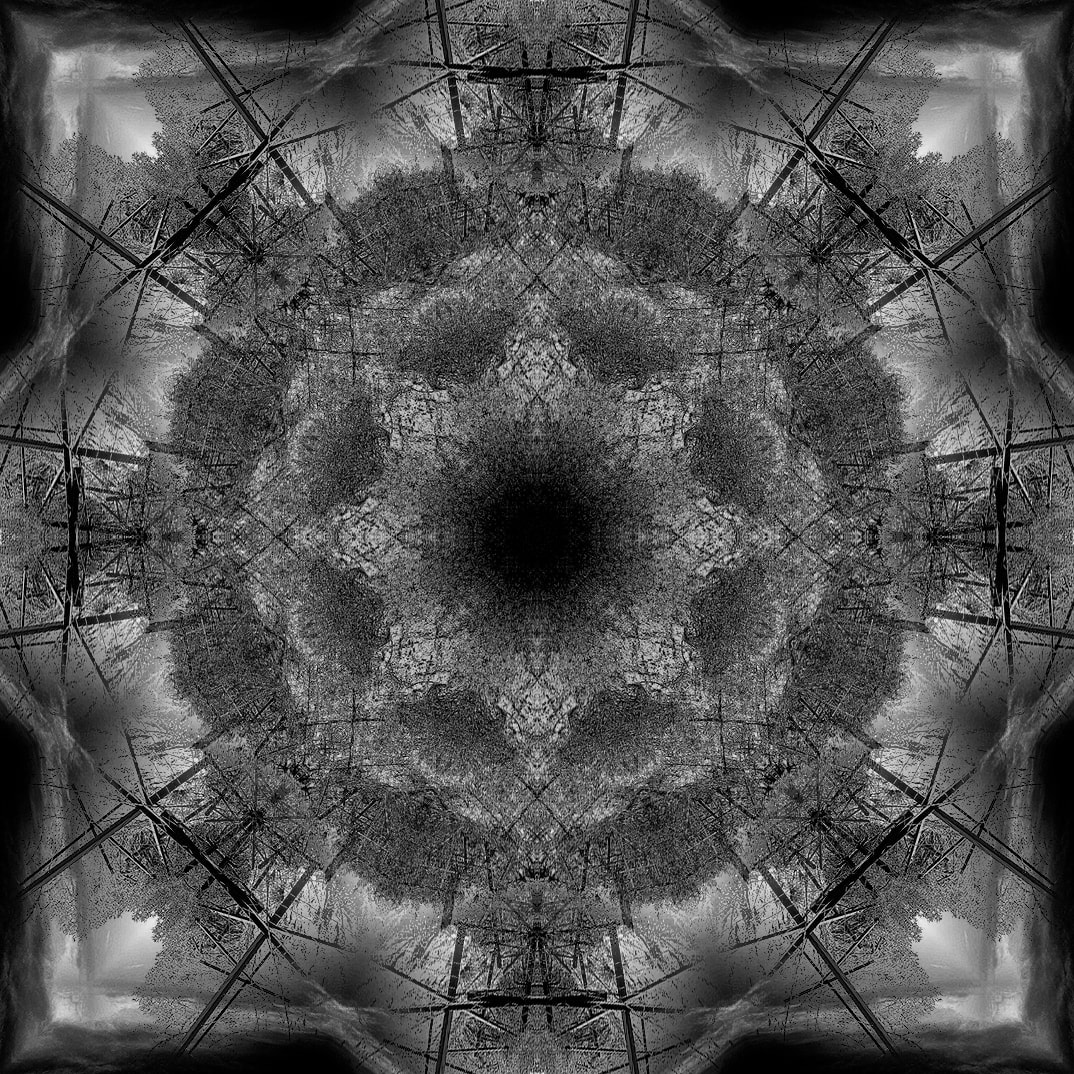 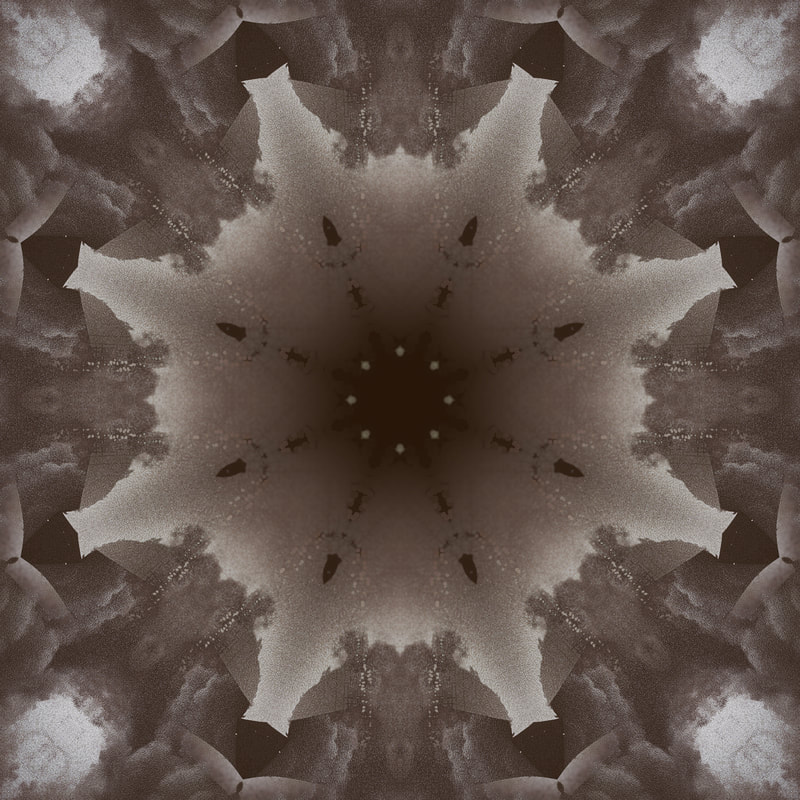 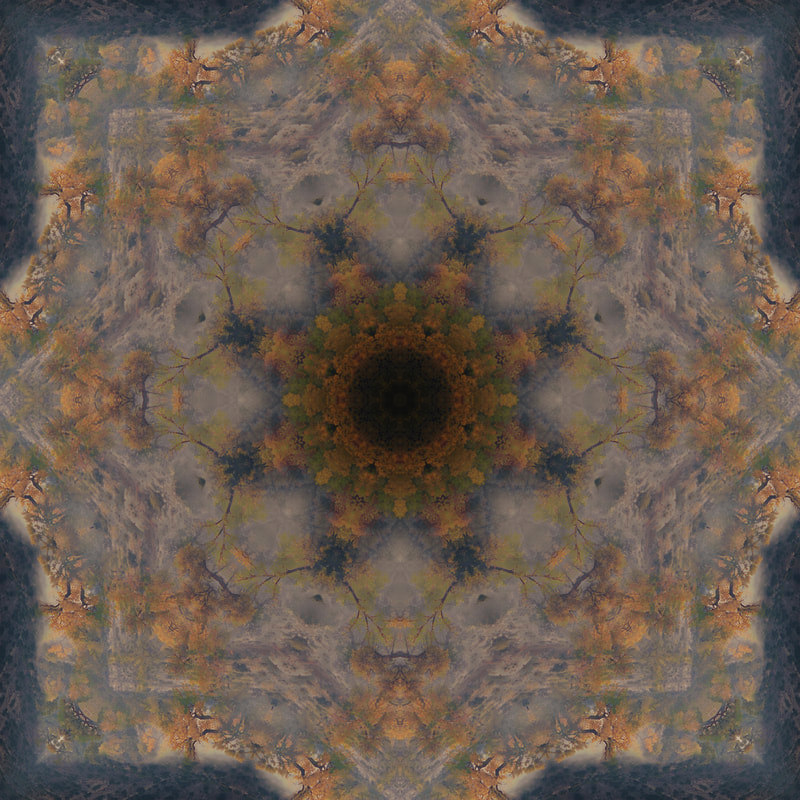 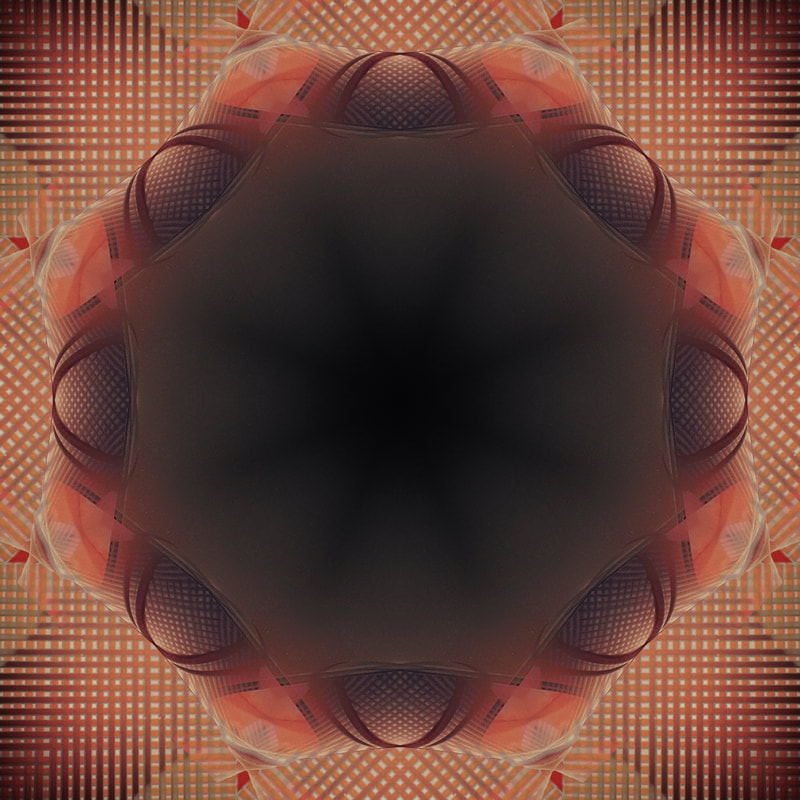