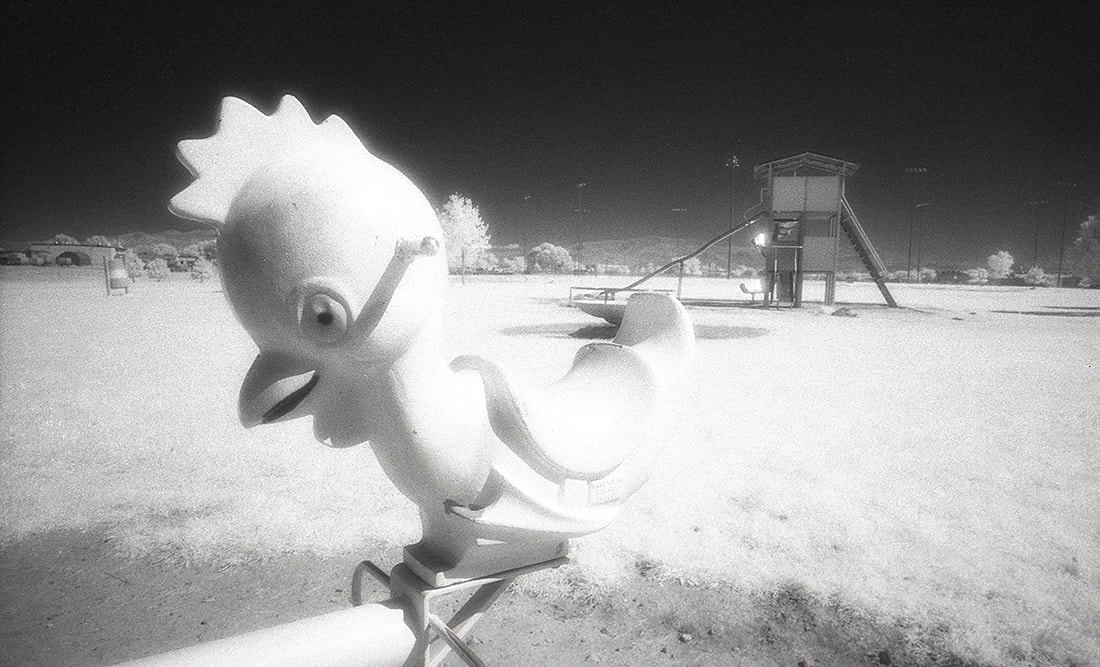 When I was still shooting film, I always had one of my Leicas loaded with infrared. The Leica was a perfect camera for infrared because it was a rangefinder. When I would attach an IR filter (it was opaque so one couldn’t see through it and it passed only IR light waves) to the lens, I wasn’t looking through the lens as I would have if I had been using a single lens reflex camera, so it was easy to compose and focus. With an SLR the photographer would have to remove his or her IR filter from the lens, compose and focus, and then reattach the filter onto the lens to actually take a photo.

I’ve always liked high contrast images in the style of English photographer Bill Brandt, they have a gritty, dramatic look, so using black and white infrared film takes that style to another level.

There are numerous ways to use a digital camera to take infrared photos, and I have tried a number of them, but I still prefer the look of infrared film. It is subjective no doubt. It might be like those people who insist that vinyl records are the only way to listen to an album. There is some intangible aspect of a film infrared image that is tantalizing to me, although it’s hard to put into words.

Some of that may be the, somewhat, unpredictability of film. With a digital camera you can look at the LCD screen and see the effects before taking the photo. I always enjoyed the mystery and surprise of using a film camera. Naturally, as I got more adept at using infrared film, I got better at predicting results, but there were still times when the film and subject would surprise me.

Using infrared was like being able to step into a surrealistic landscape. There was a dreamlike quality to the images. Foliage would change dramatically. The sky would normally be extremely black. And the whites would often be bright or even washed out, with a hazy, glowing, halo-like effect that appealed to me greatly — and still does.

When I would go out with my film cameras, I always had regular black and white film along with color loaded into two other bodies along with the Leica with the infrared. As I have been looking through my film archives, I realized I used the infrared rather sparingly. I didn’t’ automatically shoot a few infrared frames while I was also shooting Tri-X or HP5 or Kodachrome.

There are a few recurring themes in my infrared work: abandoned cars, descansos (roadside crosses) and one that revolved around playground equipment from an earlier age. When I would take trips for photographic assignments, I would often stop at city parks in small towns, and they often still had pre-plastic playground toys for the children such as strange, giant, metal chickens or metal rocket ships that looked like they could have been used as props in the Flash Gordon TV series. There were giant, undulating slides. There were merry-go-rounds that are getting rarer and rarer as time goes on. These vintage playground toys were made in the same era as some of the flashy cars being produced at the time, with giant fins and chrome galore — cost be damned. There were toys that Raymond Loewy, the designer who might be called “The Father of Streamline Design,” would have appreciated.

The park toys seemed particularly perfect for infrared, making them seem magical or mystical, something you might imagine being the subject of a child’s dreams, or something out of movie director Tim Burton’s fantasies. 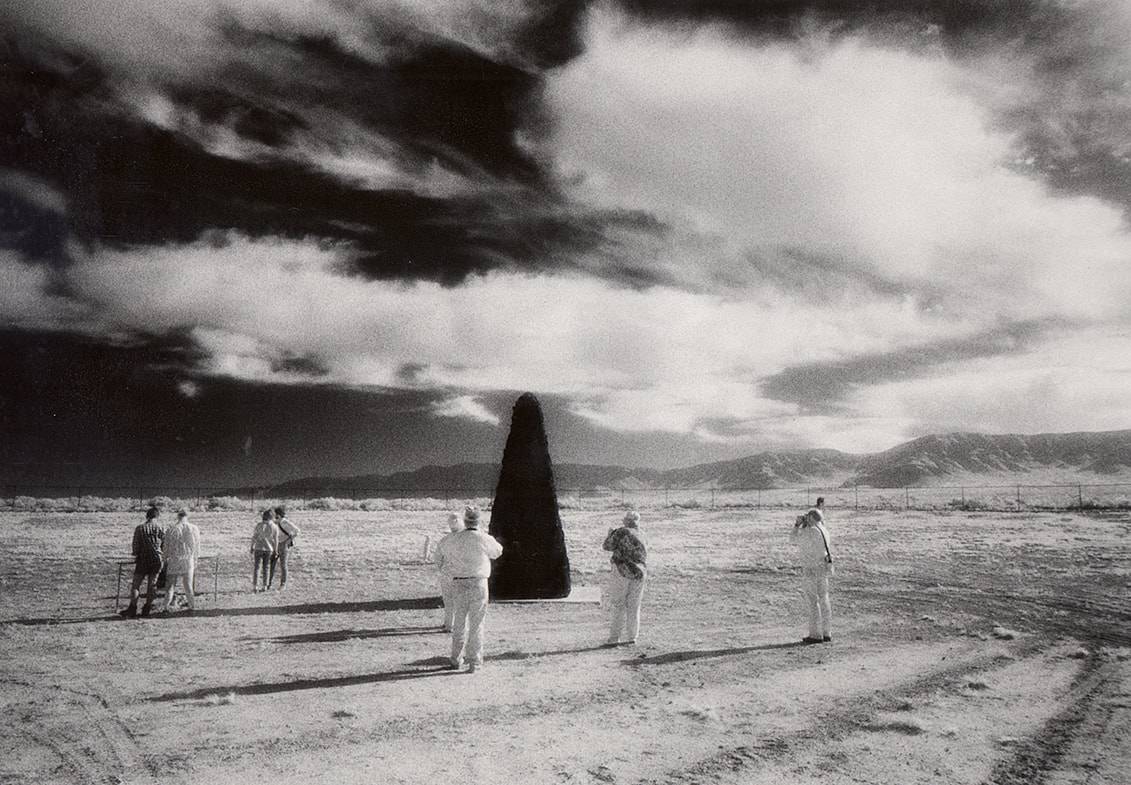 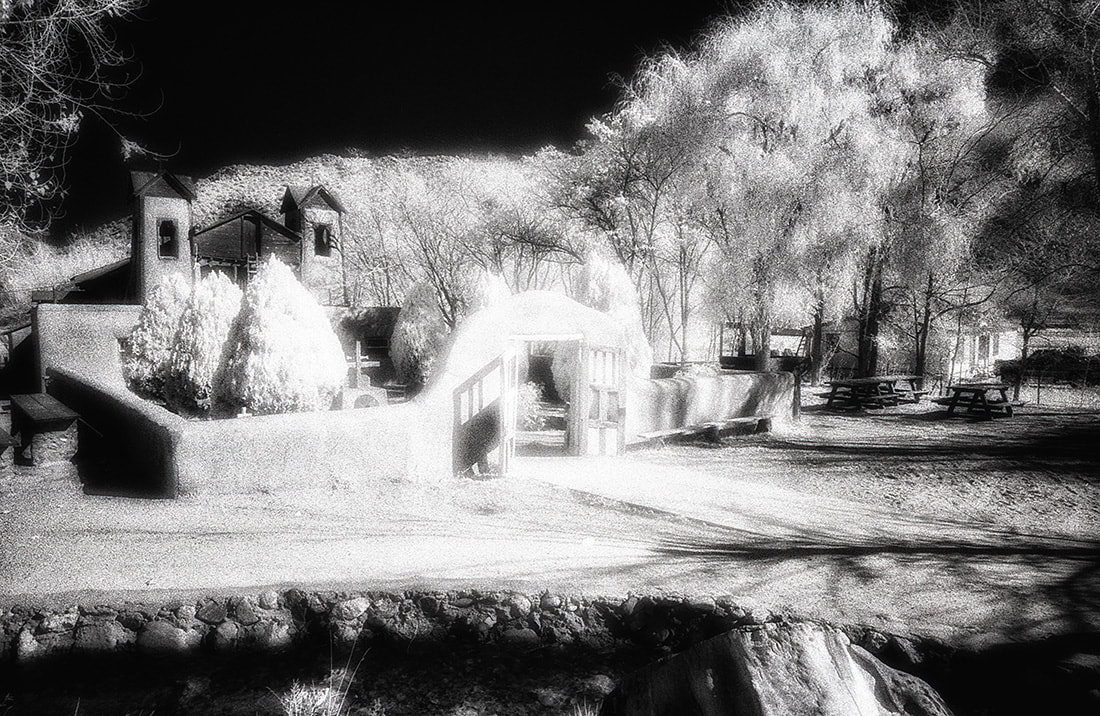 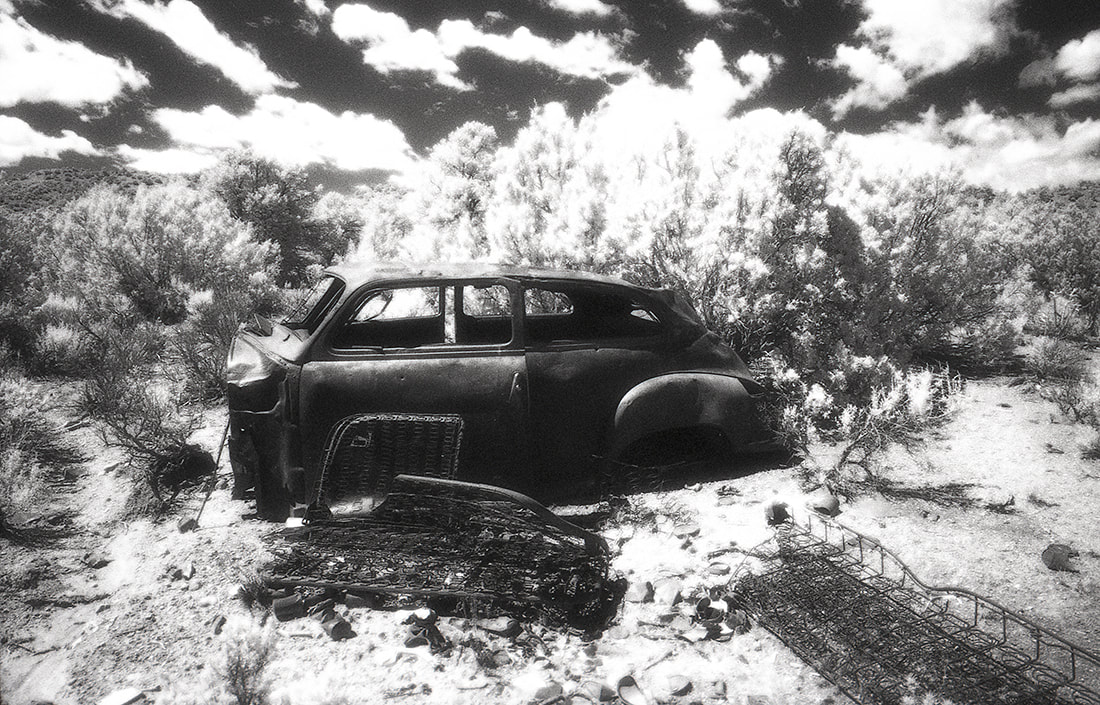 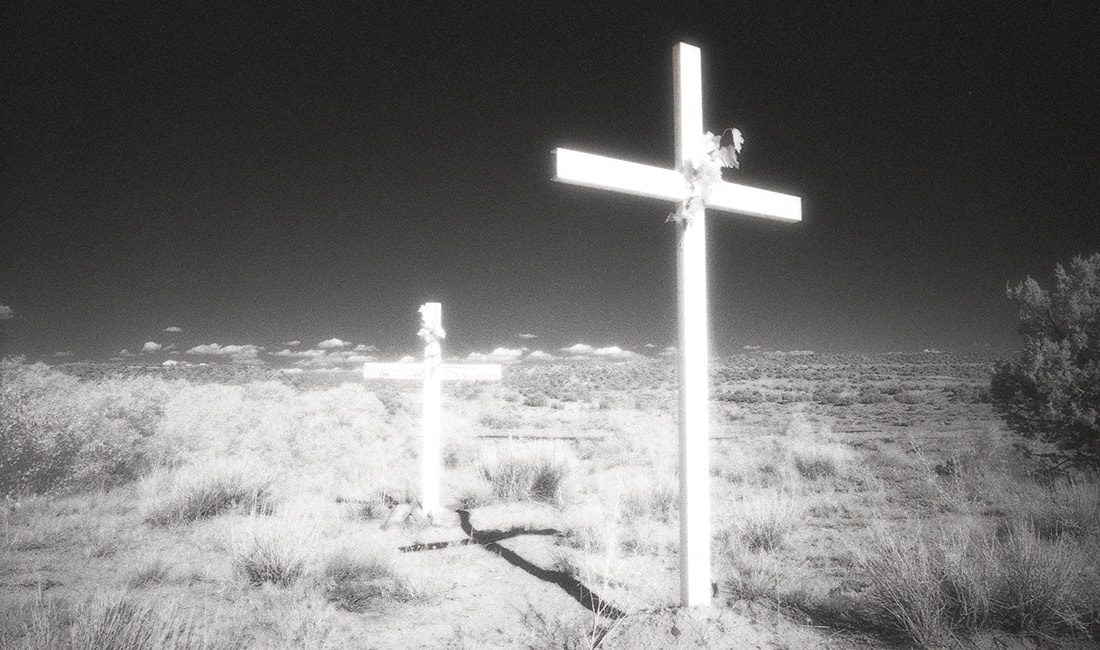 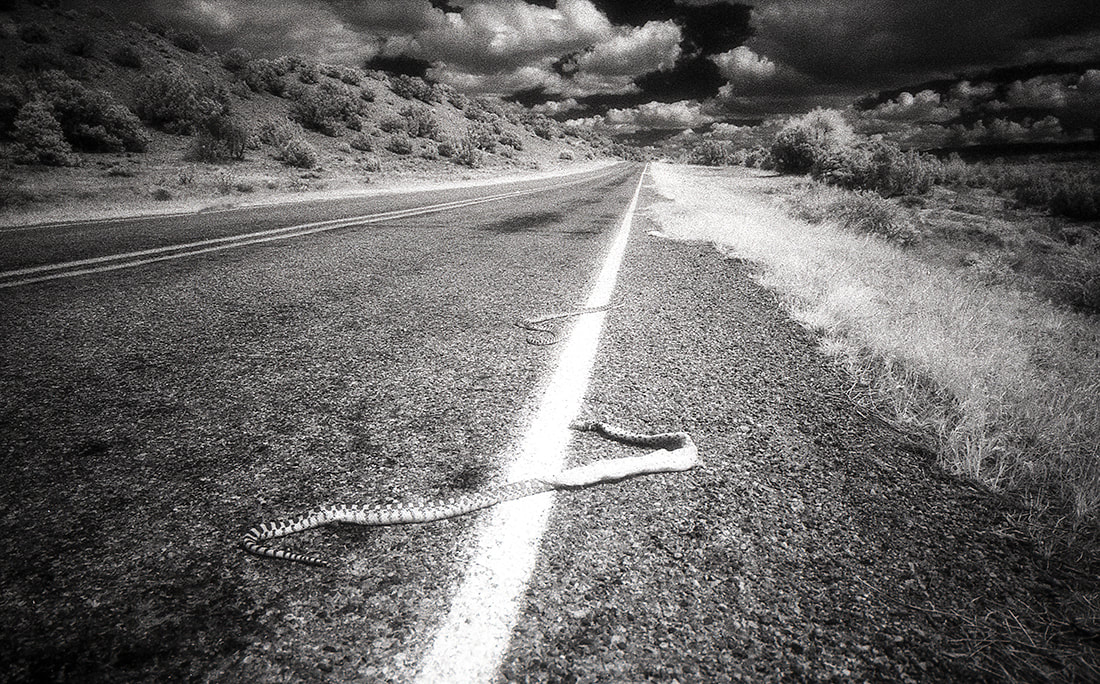 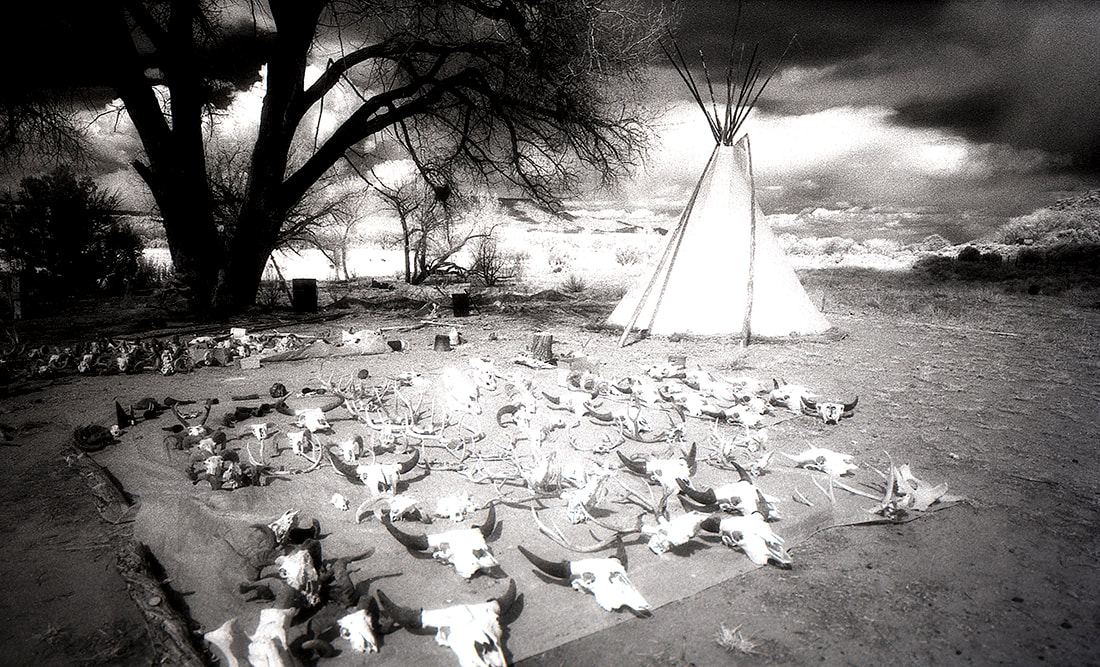 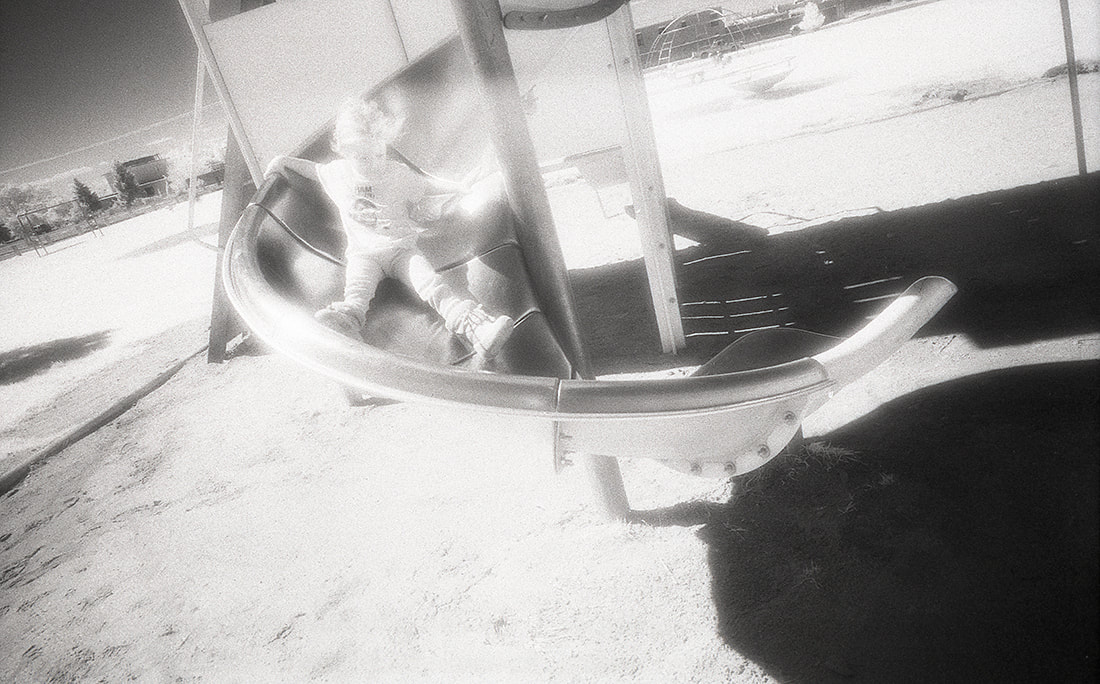 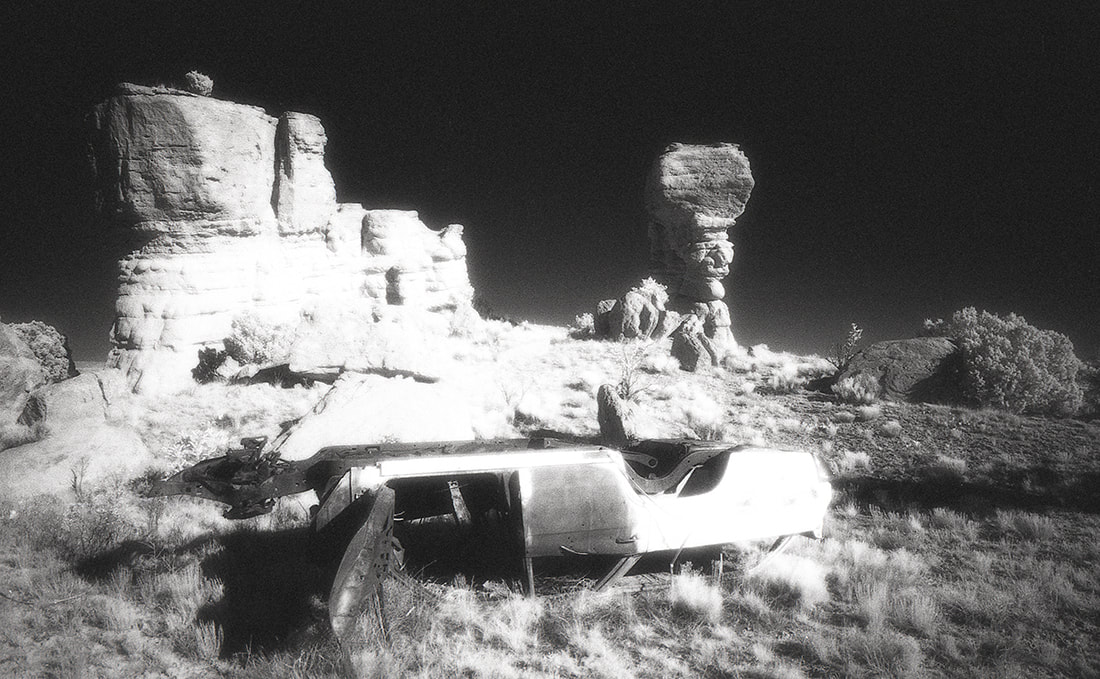 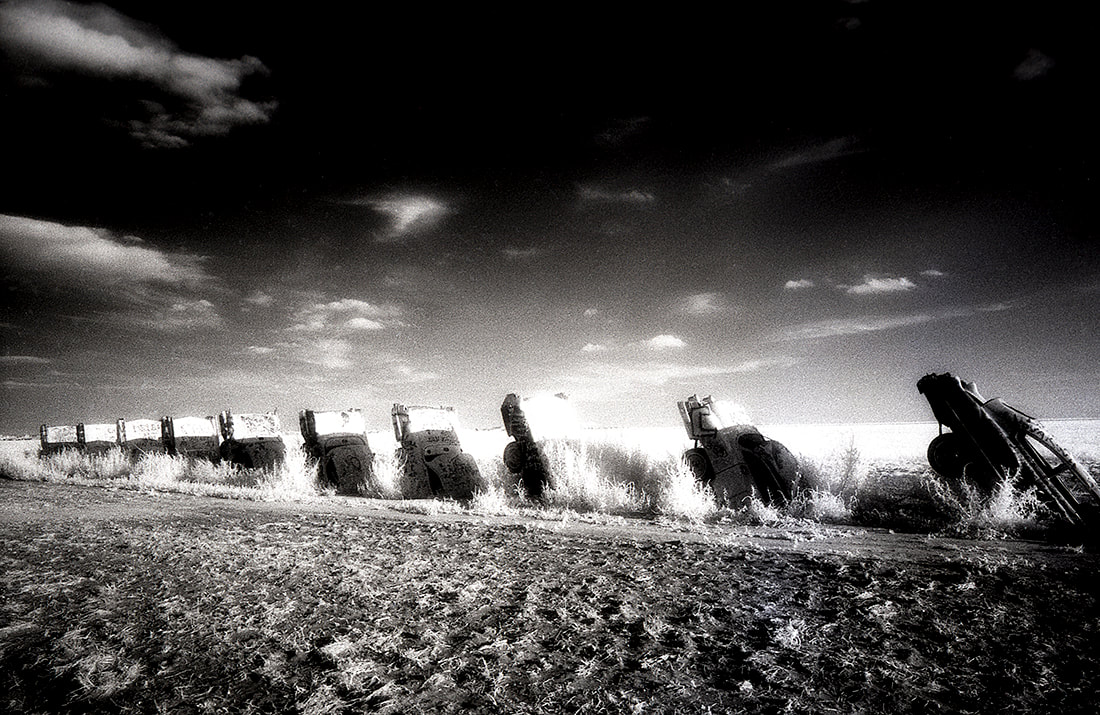 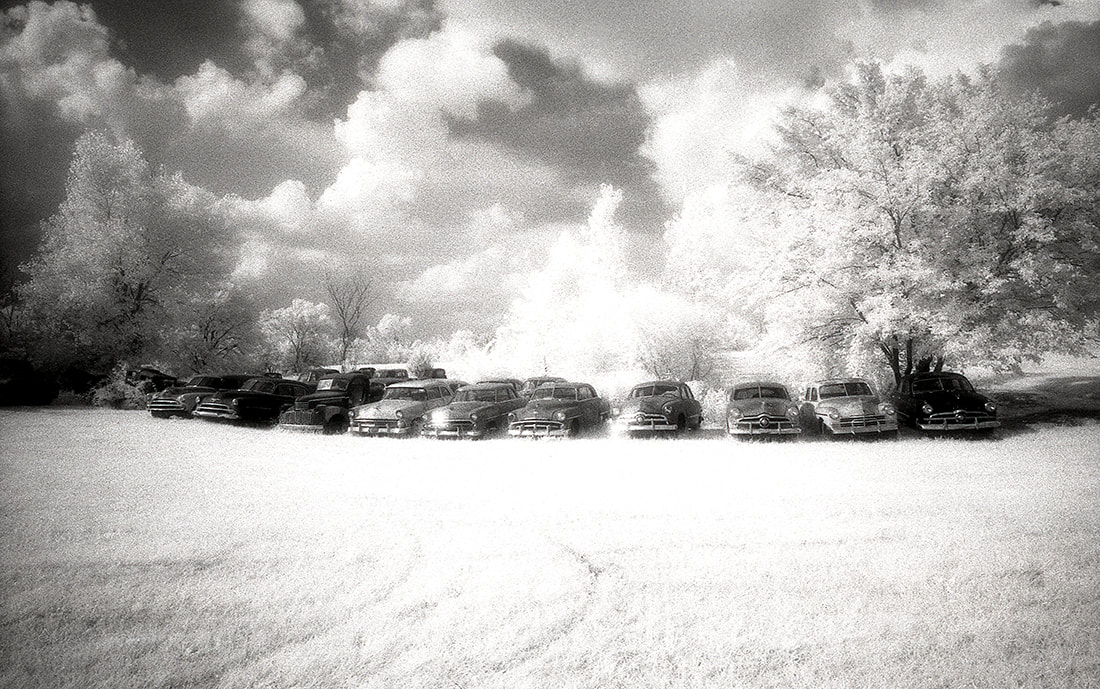 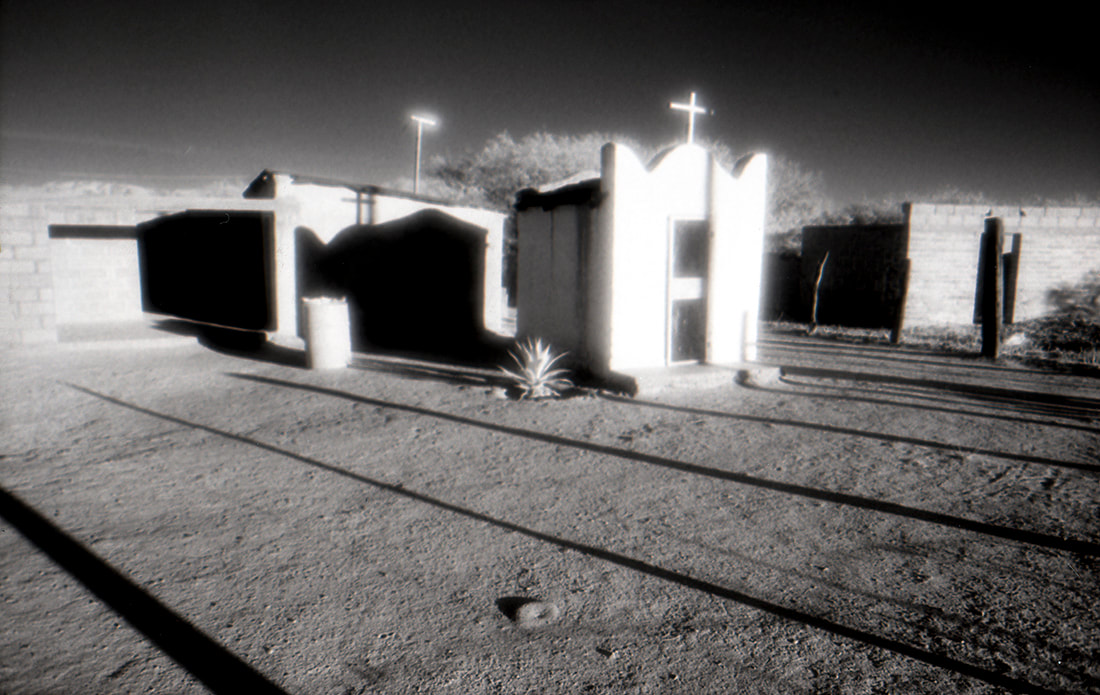 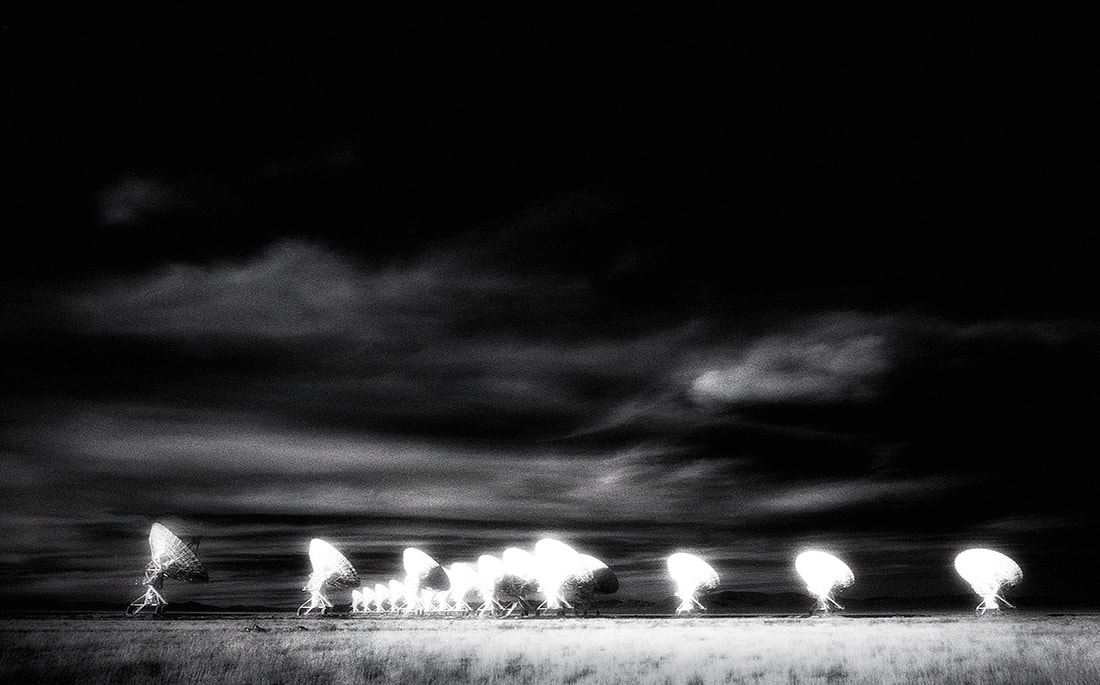 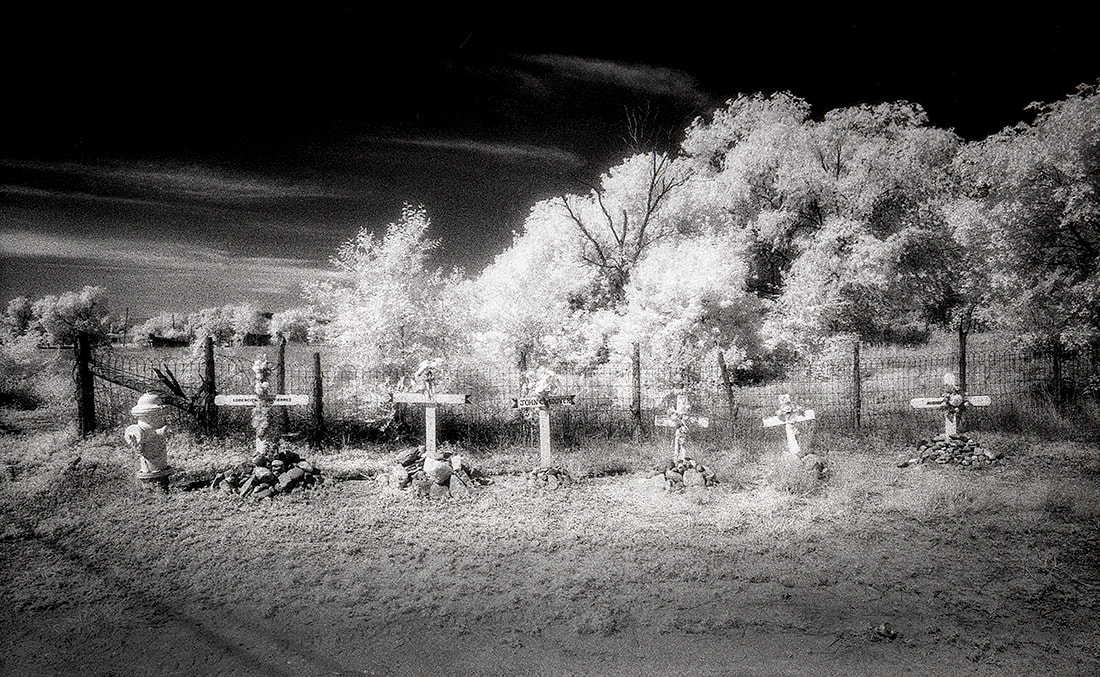 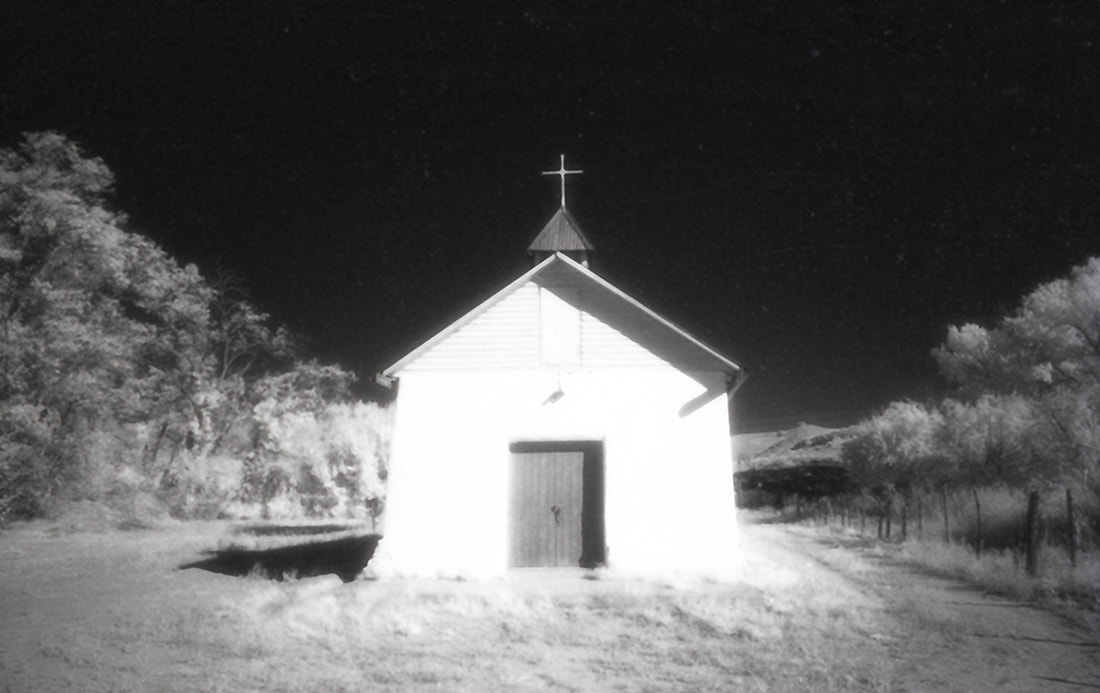 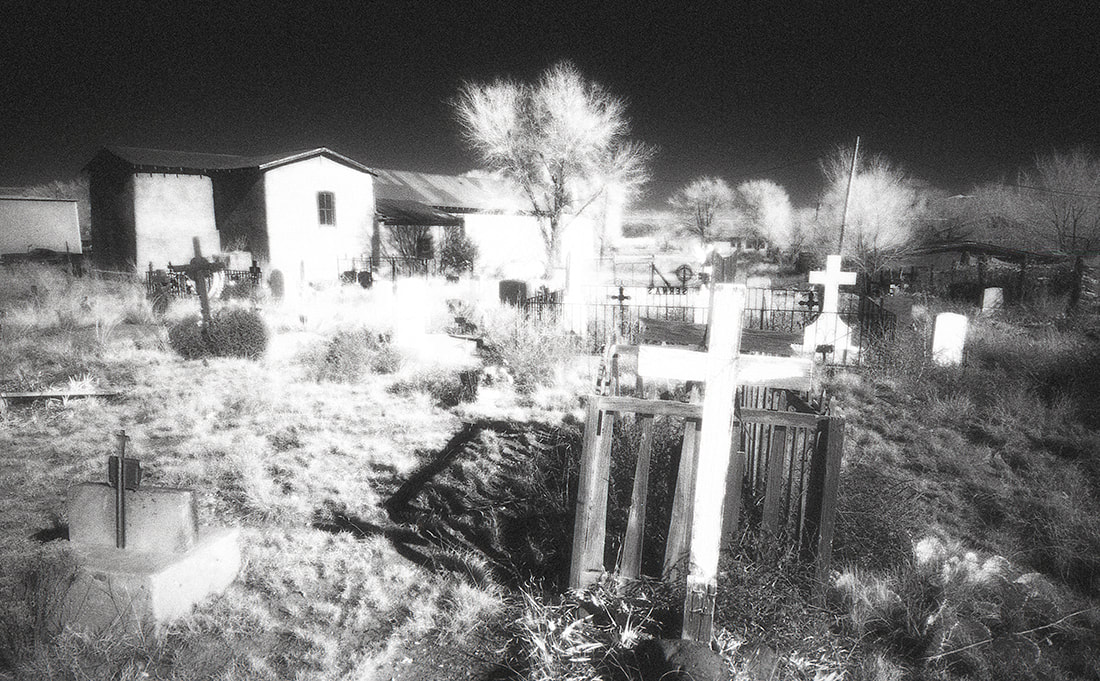 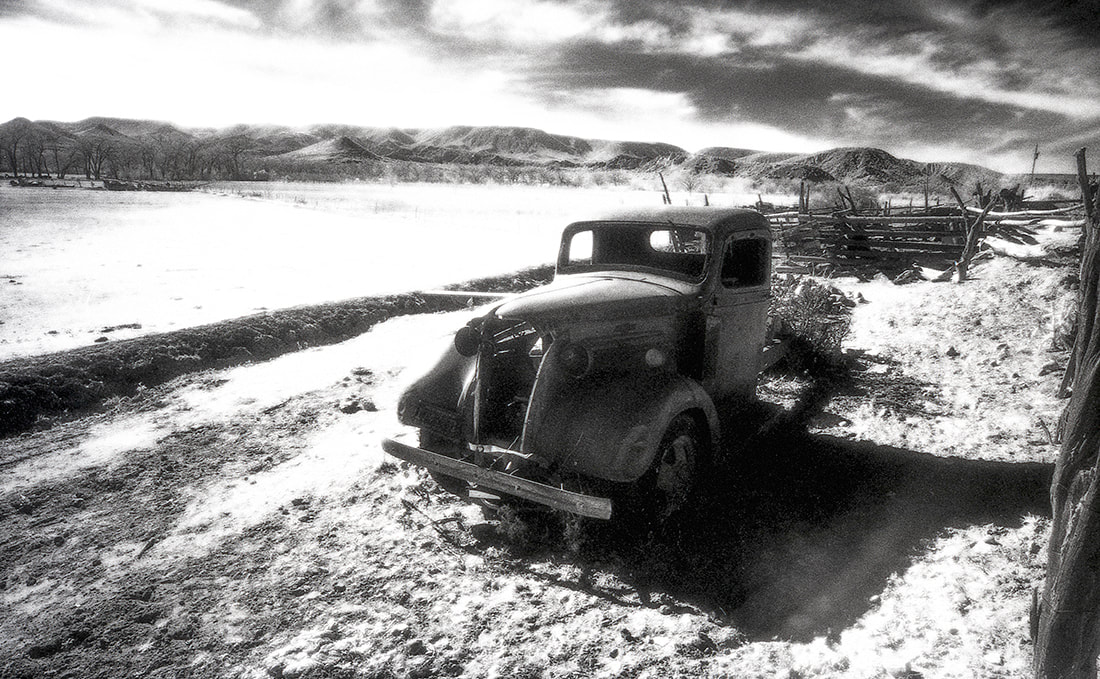 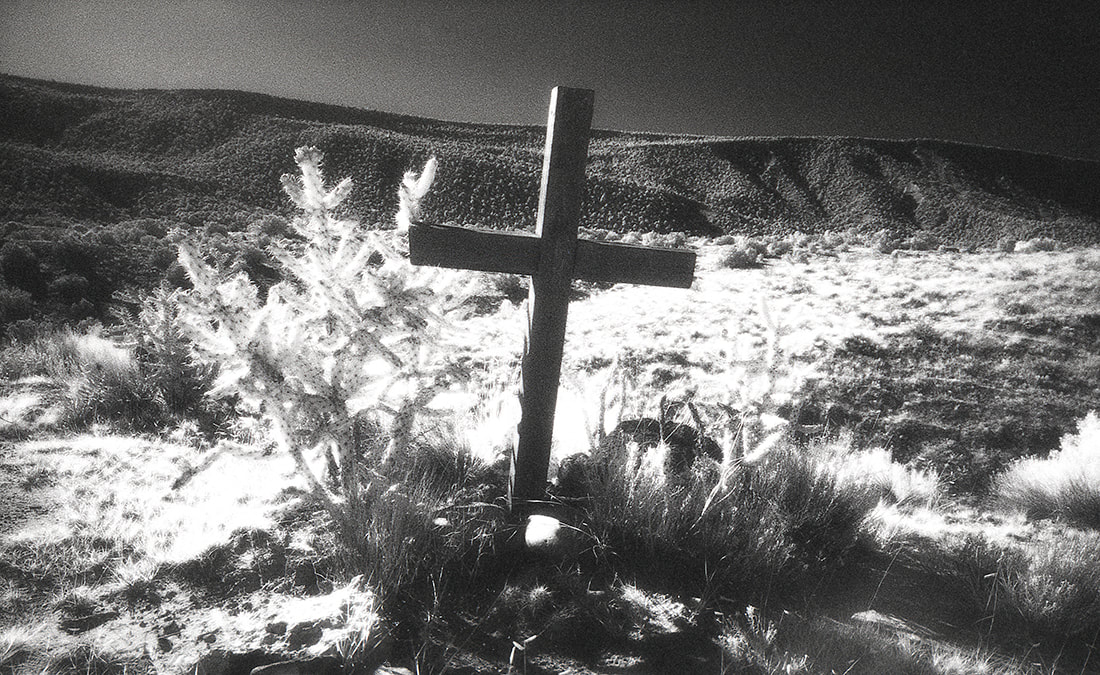 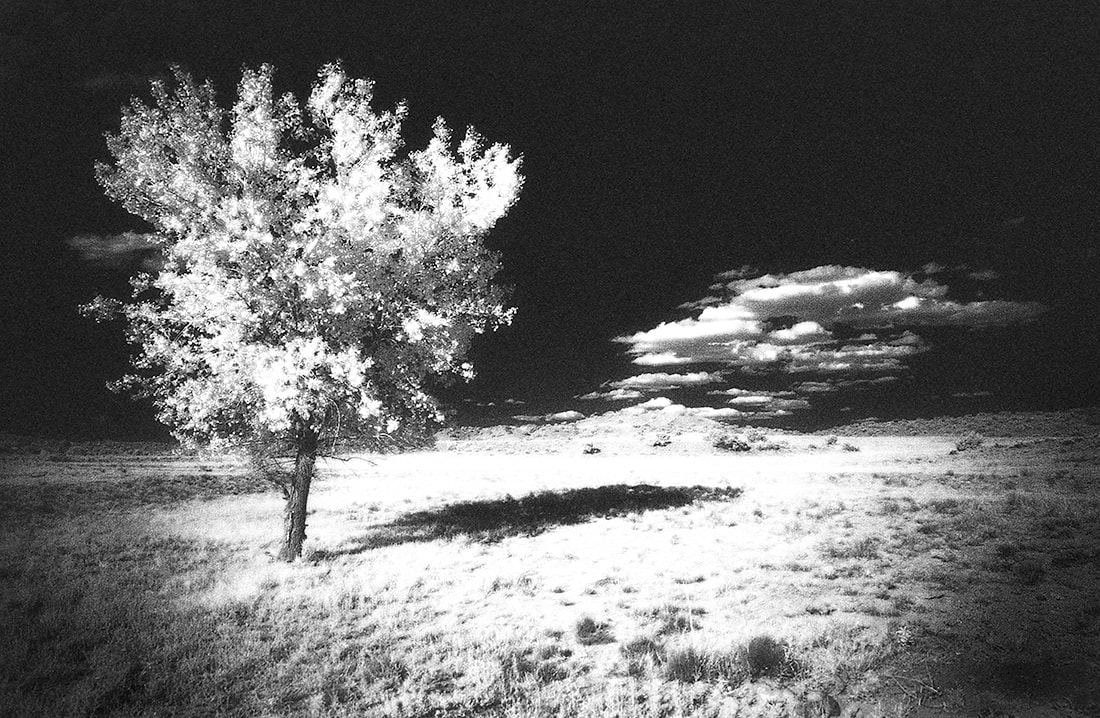 Although I prefer using infrared film, I have dabbled a bit into the digital infrared realm. Here are two digital images I have taken recently. I know there are a lot of photographers out there doing color infrared work, but I prefer black and white. I find the color garish and a bit too manipulated-looking, as if someone dialed up the saturation to its max in Photoshop. 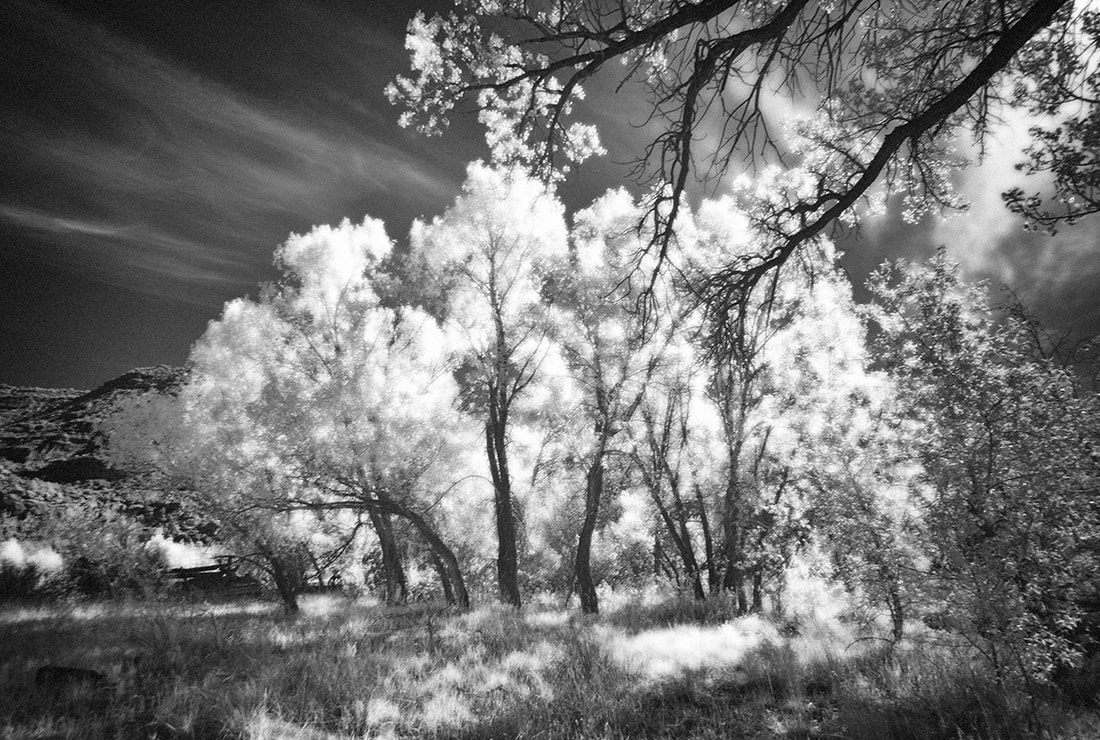 Trees near my home in Northern New Mexico 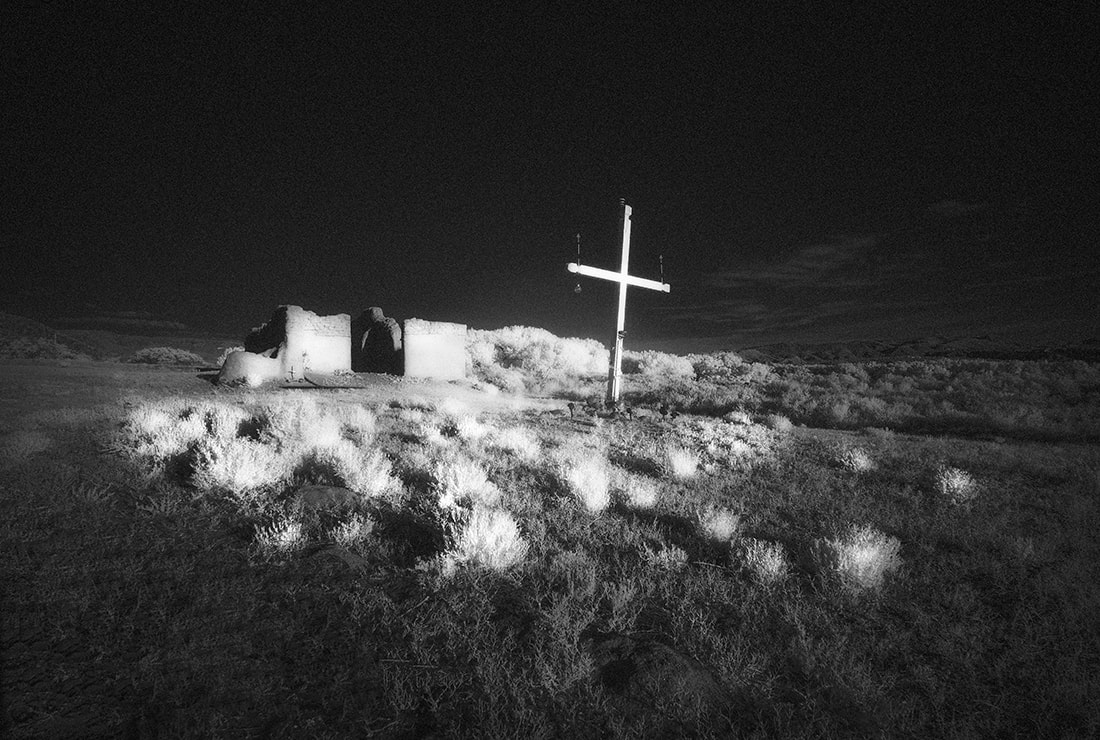 Santa Rosa de Lima church ruins, Abiquiu, New Mexico
To contact Bob Eckert for assignments, consultations or workshops, please email bobeckertphotography@yahoo.com
​or use the contact form on the About page