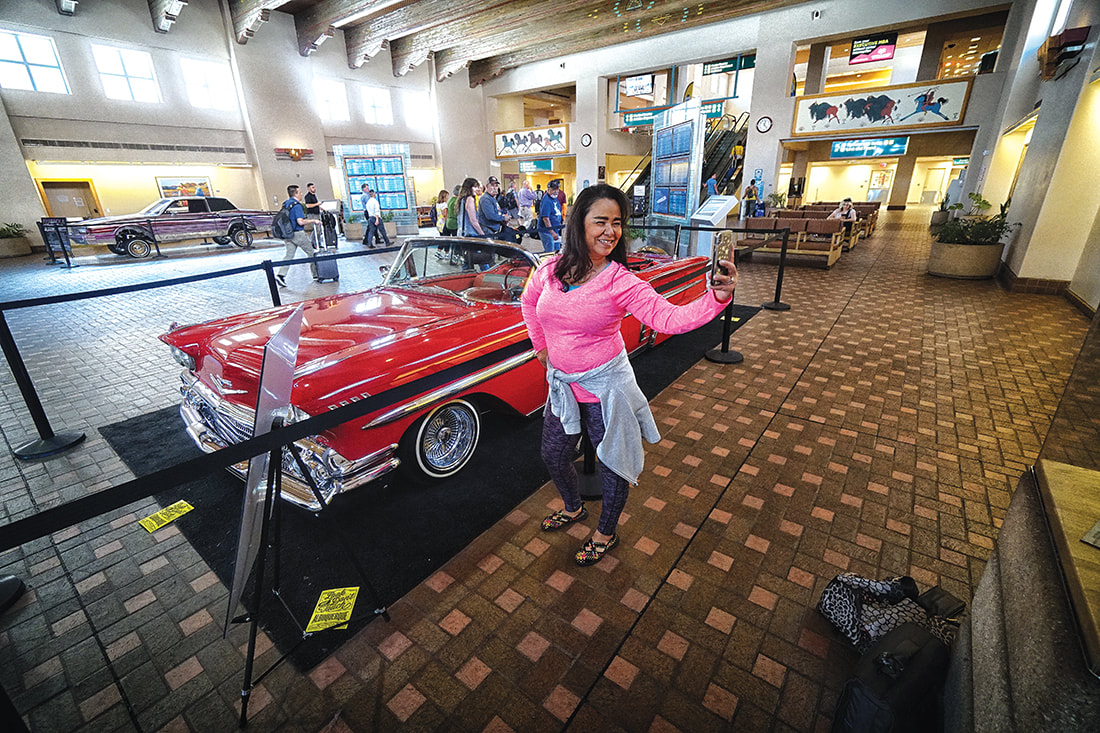 During the summer of 2016, the New Mexico History Museum held an exhibit titled “Lowriders, Hoppers and Hot Rods: Car Culture of Northern New Mexico,” curated by then photo curator at the Palace of the Governors in Santa Fe, Daniel Kosharek.

I was fortunate enough to have a large number of photos included that exhibit. After it closed at the Museum it toured the state. After the tour ended there was a lowrider-inspired exhibit at the Albuquerque Sunport in 2018, which I was also asked to participate in. The following is a story I wrote for the Rio Grande SUN newspaper in Española. Following the story are my photographs that were chosen for the Sunport exhibit.

“I took over as the curator in October 2018,” Baptiste said. “We had been talking about what I’d do at the airport for about four months before I took the job. I threw out a lot of ideas. One of the ones the director really liked was the lowrider exhibition.”

Baptiste had seen the show at the History Museum. He called the Museum and spoke with Daniel Kosharek, who said Baptiste’s call was timed perfectly. The show had been traveling around the state and they were preparing to decommission it and put it in their archives.

Kosharek was, at the time, the person who had organized the History Museum lowrider exhibit and the photo curator at the Palace of the Governors in Santa Fe.

“When we had decided that we would actually have the exhibit at the airport, I let Daniel decide which photographs would be included,” Baptiste said.

“I’m convinced there are two kinds of people in the world,” Kosharek said. “Those who drive for the purpose of getting from point A to point B, mere transportation if you will; and people like me who drive cars to, well, drive cars. Two types of people, two world views. This exhibit is about the latter: People who express themselves through pride in their ride.”

After decades of cruising the streets and back roads of Northern New Mexico, lowrider cars have come into their own as a symbol of Hispanic cultural identity. They’re as evocative as red and green chile, rural adobe architecture, and the distinctive dialect of New Mexican Spanish. These cars have been celebrated in books and movies, and their creators congregate by the hundreds in car shows throughout the region to show off their works to an admiring public. That phenomenon is only one part of a broad car culture.

Consider the classic “bombs” (large, rotund American cars ca. 1930–1955); “originals” (old cars restored to their original condition down to the upholstery and engines); “hoppers” (cars outfitted with hydraulic lifters that allow them to bounce and jump like June bugs on a griddle); and “hot rods” (classic American cars modified with large engines).

“It’s all part of an American love affair with the internal combustion engine and the glimmering accouterments that these vehicles have inspired through history,” Kosharek said.

His first car was a 1957 Chevy two-door hardtop in matchstick color—royal blue on bottom, baby blue on top.

Baptiste had the chosen photographs reprinted so they would all be uniform in size and he worked with Joe Romero, of Artimist Promotions, to get the cars and motorcycles that are on display.

“The airport hadn’t had a curator in 13 years, and so we had a lot of questions, and a lot of those questions revolved around security,” Baptiste said. “At the end of the day we didn’t have as many problems as we might have, but we did need to go down those channels. It was a lot easier than we had expected. We just didn’t want to break any rules.

He said they followed what the fire marshal suggested, which is a quarter tank of gas or less. An empty gas tank is more combustible than one with some liquid in it.

The exhibit is located on two levels at the Sunport. One level up from the baggage claim area and then the next level up, which is where people go through security. The exhibit doesn’t extend into the secure area where only ticketed passengers can go.

“My main thought was that I wanted to represent both Española and Albuquerque in the exhibit,” Baptiste said. “I grew up in Taos (actually San Cristobal) and my dad lived in Santa Fe, so when I was commuting to see my dad in the mid-‘90s, Friday nights were always this amazing thing to me.”

When Baptiste moved to Albuquerque, he found a very robust lowrider culture there as well, but one that was different than in Española, and he wanted to show those two faces.

“Something that was really important to me was to show the difference between a ‘soft car’ and a ‘loud car,’” Baptiste said. “I think someone who had never seen a lowrider and see and candy painted car and be like, ‘I love it,’ or ‘What is it?’ And give them the option of seeing a ‘soft’ car such as Joe’s ’58 Impala.”
Baptiste wanted to show the more traditional looking cars along with ones that might be thought of as more extreme.

“The biggest part for me is the family and community aspect,” Baptiste said. “Growing up in Northern New Mexico, there is not a lot of positive influence and positive outlets for youth, so the creativity and art of the lowrider, the passion of being able to build something — some of these cars are six years in the making — was the family involvement. That’s what has always struck me about this culture, yes they are beautiful pieces of art, at the same time it’s a community things, not just an individual artist painting a painting or making a sculpture, it’s lot of people being involved.”

Baptiste said that often, in a normal setting, the way some of the car owners look or the way they talk may be construed as being a gangster. That was one of the biggest pushbacks he got while organizing this show was.

“And what I’ve heard from multiple people after we finished this is they now see the beauty and they realize this isn’t a bunch of gangsters,” Baptiste said. “And that for me is one of my favorite parts about the whole project — changing those misconceptions.

The Sunport exhibit seeks to elevate that culture beyond its common stigmas and stereotypes to celebrate skilled craftsmanship and commitment to family and community. Car clubs regularly reach out to local youths, giving them gears-and-wrenches reasons to drive a straight road. 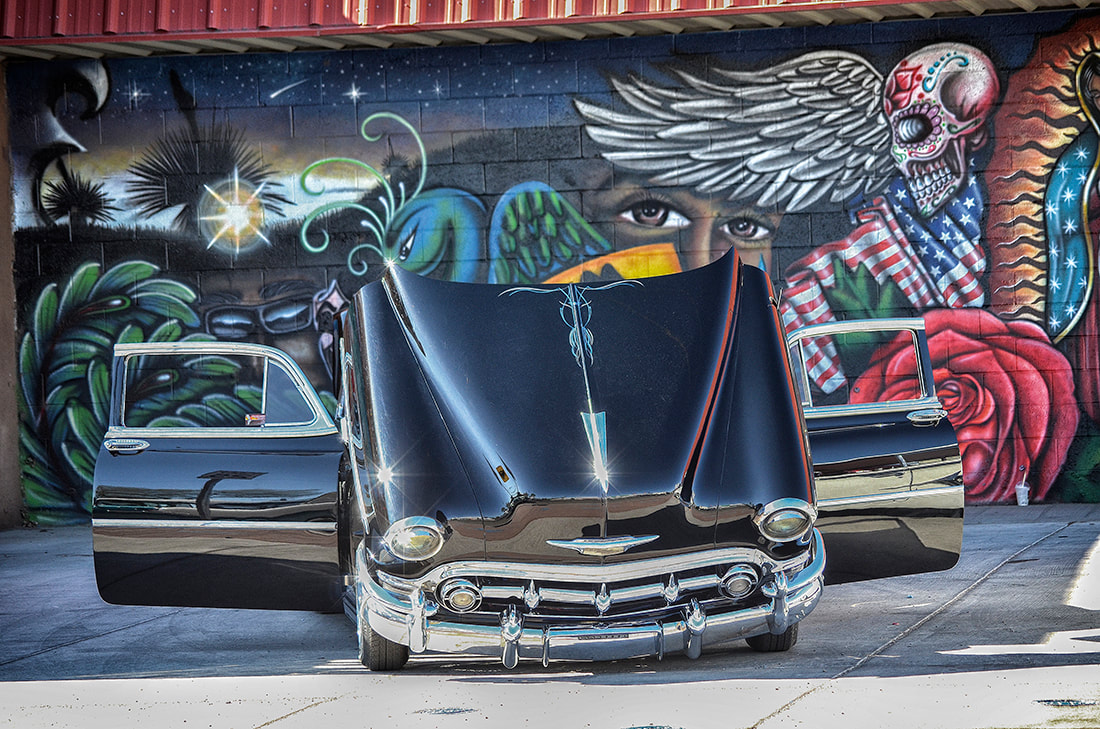 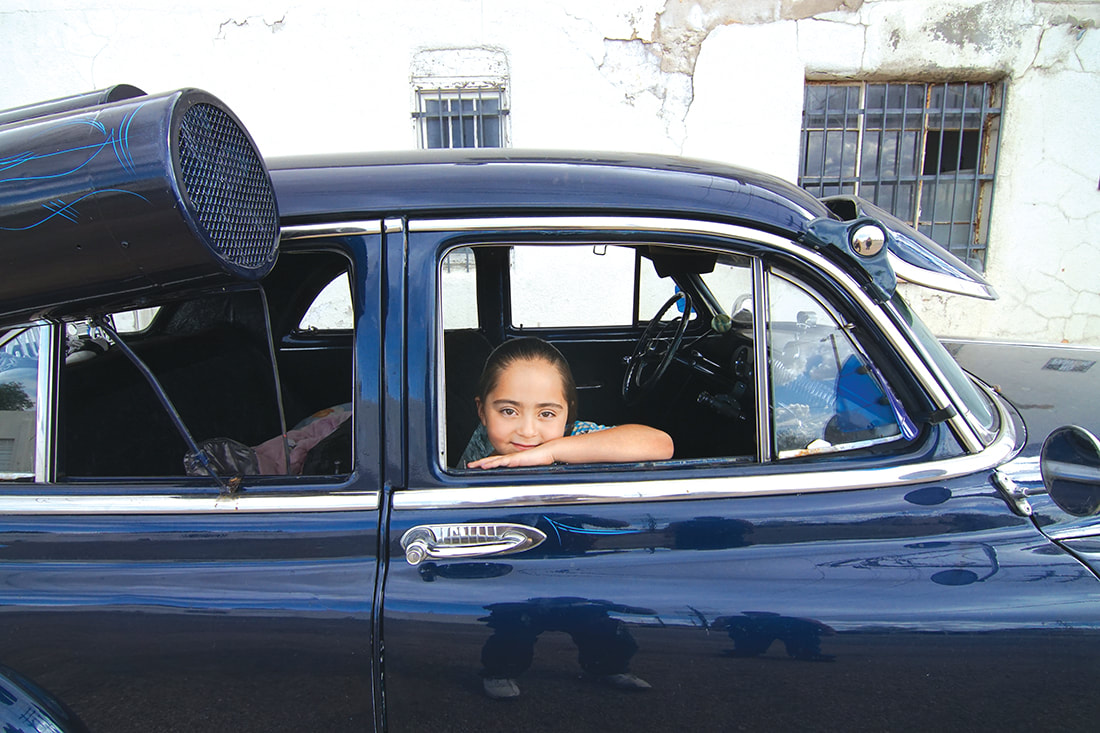 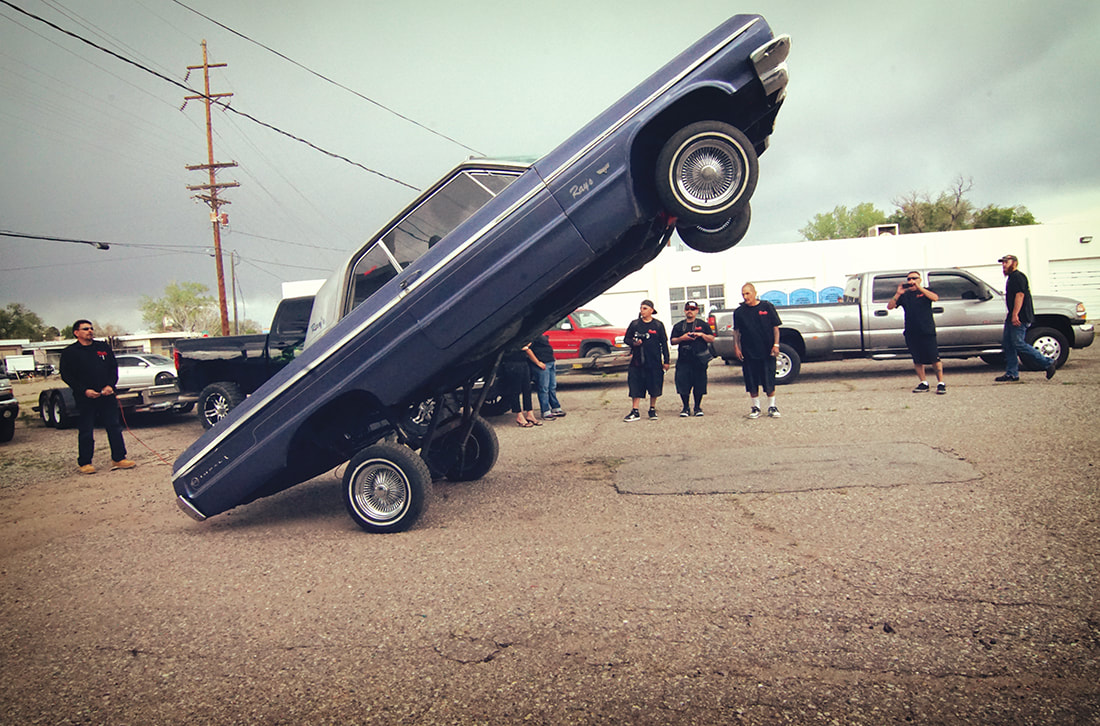 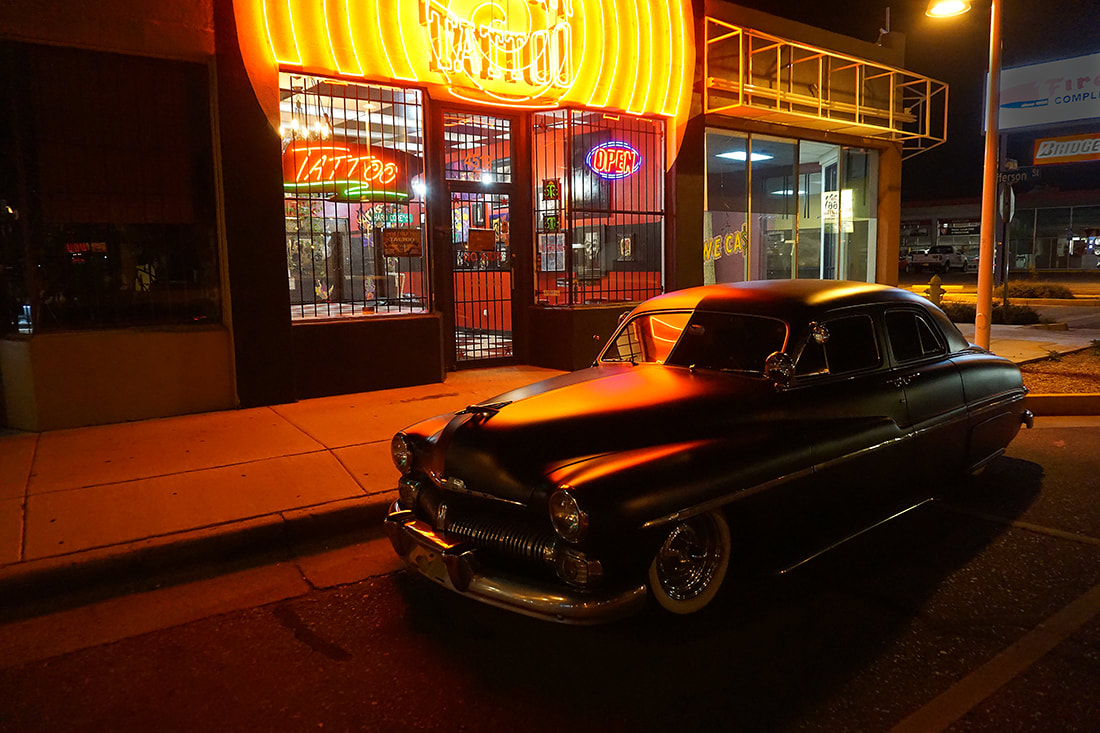 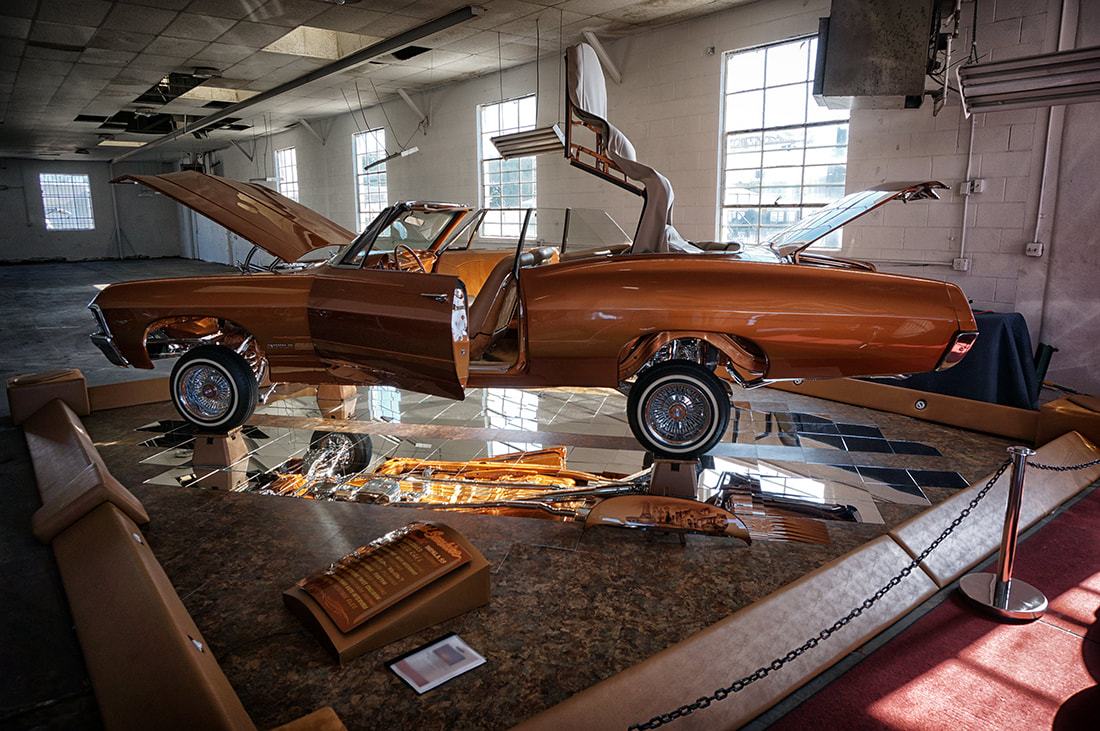 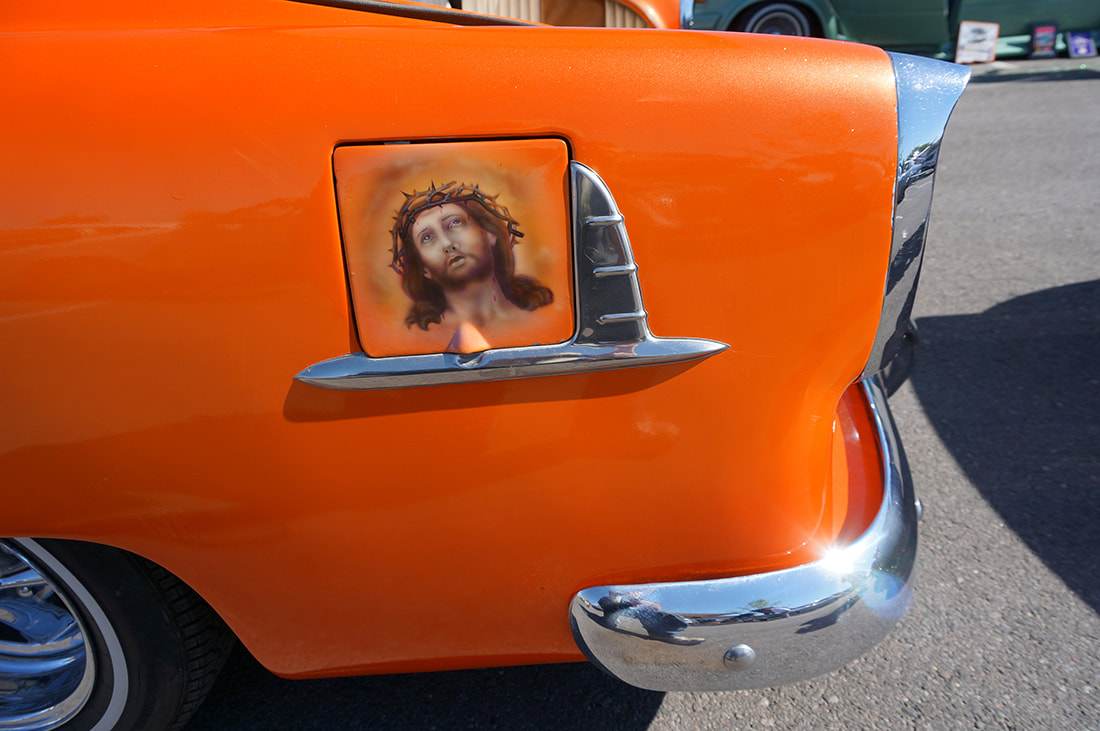 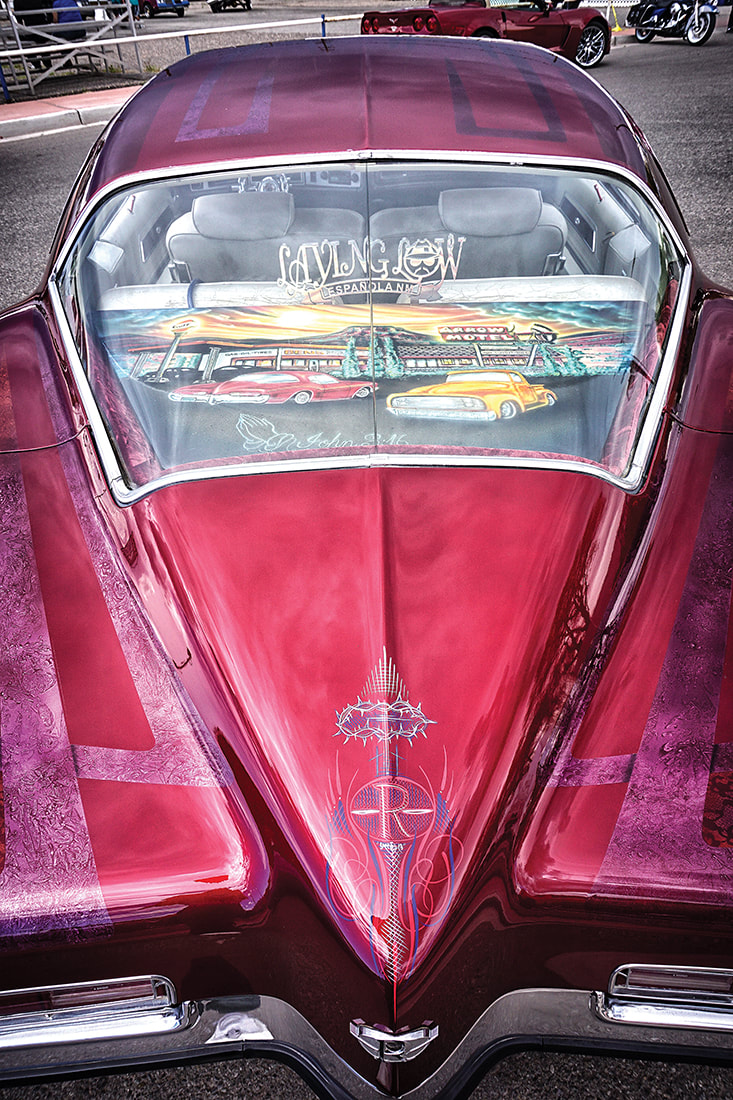 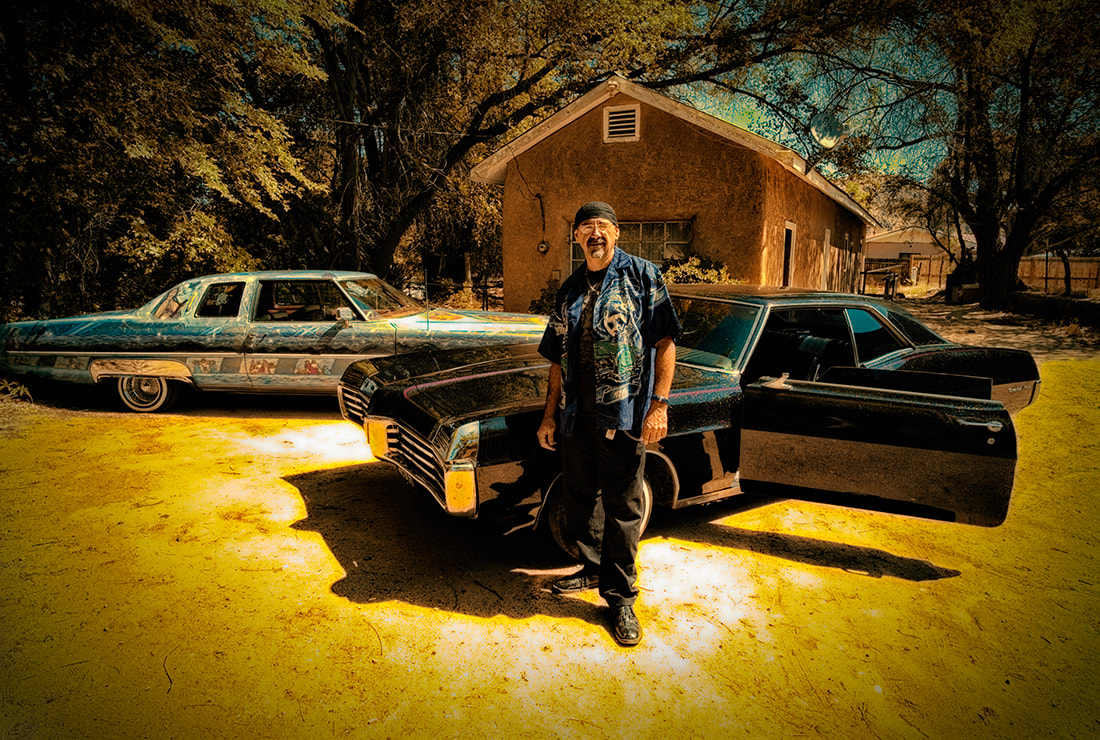